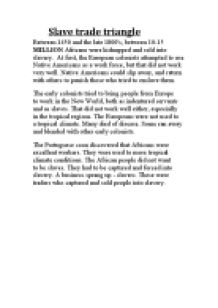 ﻿Slave trade triangle Between 1450 and the late 1800's, between 10-15 MILLION Africans were kidnapped and sold into slavery. At first, the European colonists attempted to use Native Americans as a work force, but that did not work very well. Native Americans could slip away, and return with others to punish those who tried to enslave them. The early colonists tried to bring people from Europe to work in the New World, both as indentured servants and as slaves. That did not work well either, especially in the tropical regions. The Europeans were not used to a tropical climate. Many died of disease. Some ran away and blended with other early colonists. The Portuguese soon discovered that Africans were excellent workers. They were used to more tropical climate conditions. The African people did not want to be slaves. They had to be captured and forced into slavery. A business sprang up - slavers. ...read more.

A planter, Mr. Jameson, offers his slave Mariah, her son Samuel, and her infant daughter for sale to anyone who will give a good price. Jameson needs cash to pay off a debt to the bank. Mariah's husband and her mother must remain on Jameson's plantation. Mariah, Samuel, and the infant, once sold, must go wherever their new owner takes them. The white citizens of Richmond crowd the marketplace. At the virtual tour of the auction, you can Many slaves were not sold through auctions, but through newspaper advertisements (very much like we today sell our old bikes and cars?): This is a typical slave advertisement from Harrisburg, Pennsylvania, 1795. The terms "healthy" and "stout" were often used to describe a woman's physical condition. This woman has probably served most of her life on a farm and is trained in both housework and farm work. This, too, is typical of slave women in this region (Pennsylvania) ...read more.

The refined sugar could now be loaded into large barrels to await transportation back to Bristol or Liverpool on the return passage. Working in the boiler houses was very unpleasant. The stench, like sickly manure, was filthy, and the heat terrific. Limbs swelled in the hot, damp atmosphere and even the strongest slaves, specially picked for the job, could not work in the boiler house for more than four hours at a time. The slaves existed for nothing except work. Not all were cruelly treated, but many suffered savage and horrible punishments. Worst of all they had no future to look forward to. They were condemned to a life or endless toil, and their children after them, And their grandchildren, to eternity. It is not surprising therefore to find out that many slaves Tried to escape this terrible life. However, if recaptured, they could expect little mercy from Their owners, who would want to make an example of them to deter others from trying to Escape. Terrible whippings were common and on some plantations Ruthless overseers carried out other much crueler punishments. ...read more.