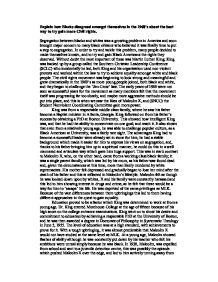 Blacks and their civil rights

Explain how Blacks disagreed amongst themselves in the 1960's about the best way to try gain more Civil rights. Segregation between blacks and whites was a growing problem in America and soon brought major concern to many black citizens who believed it was finally time to put a stop to segregation. In order to try and tackle this problem, many people decided to make themselves known, and to try and gain Black Americans the rights they deserved. Without doubt the most important of these was Martin Luther King; King was backed up by a group called the Southern Christian Leadership Conference (SCLC) who incidentally he led, both King and his organization used non-violent protests and worked within the law to try to achieve equality amongst white and black people. The civil rights movement was beginning to look strong and meaningful and grew dramatically in the 1960's as more young people joined, both black and white, and they began to challenge the 'Jim Crow' law. The early years of 1960 were not seen as successful years for the movement as many members felt that the movement itself was progressing far too slowly, and maybe more aggressive methods should be put into place, and this is when we saw the likes of Malcolm X, and (SNCC) ...read more.

King used the American law to his own advantage and he thought that the 'Bill of Rights' could be used to promote their cause, he also used the Linda Brown case as evidence that violence should not be treated with violence. Martin Luther King and the SCLC's believed if they could challenge the law they could achieve social equality and make segregation illegal. MLK looked upon political and legal reforms as the most important aspect of ending segregation, and, through peaceful speeches and protests, he made racial, sexual and religious discrimination illegal and civil rights legislation was passed. Although MLK had managed to change the law in this manner, some people argued that MLK had ignored other social and economic problems such as housing for the black citizens and the fact that jobs offered to black people were still at a low standard. This meant that even though Blacks were no longer segregated, white people still looked down on them, and they were still treated as second class citizens, even after MLK had abolished the segregation law, and this was evident in their standard of living. King used a number of methods to gain equality amongst Americans. These consisted of peaceful demonstrations, sit-ins, bus-boycotts, marches, speeches, swim-ins, read-ins, and watch-ins. ...read more.

Also, Malcolm struggled to get support of white people as they accused him of being racist towards them. Unlike Martin Luther King, Malcolm X was not supported by authorities as he often challenged them with his rejection to non-violence. In conclusion, I think the main reason why black people disagreed amongst themselves during the 1960's was because of the leaders stark differences in beliefs. Malcolm X did not welcome any white people to support him and in general showed dislike towards white supremacists, opposed to King who believed 'everybody was made in the image of god' and did not judge anybody on there religion or colour. X was often criticised for being a hypocrite as he was trying to achieve something as big as equality, and was racist towards white people himself. I think this is why some black people disagreed amongst themselves weather they should support somebody with a ruthless approach or somebody like King who showed respect to others and went the right ways to try achieve social equality. Despite Malcolm X's work which helped to improve the standard of living of black people, I think that Martin Luther King and the SCLC had the best approach to gaining more civil rights as they stayed true to their beliefs and were very successful. King's work inspired many people and really provided the driving force behind the Civil Rights Movement. ?? ?? ?? ?? ...read more.