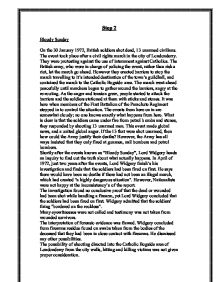 Step 2 b****y Sunday On the 30 January 1972, British soldiers shot dead, 13 unarmed civilians. The event took place after a civil rights march in the city of Londonderry. They were protesting against the use of internment against Catholics. The British army, who were in charge of policing the event, rather than risk a riot, let the march go ahead. However they erected barriers to stop the march travelling to it's intended destination of the town's guildhall, and contained the march to the Catholic Bogside area. The march went ahead peacefully until marchers began to gather around the barriers, angry at the re-routing. As the anger and tension grew, people started to attack the barriers and the soldiers stationed at them with sticks and stones. ...read more.

He says there would have been no deaths if there had not been an illegal march, which had created "a highly dangerous situation". However, Nationalists were not happy at the inconsistency's of the report. The investigation found no conclusive proof that the dead or wounded had been shot while handling a firearm, yet Lord Widgery concluded that the soldiers had been fired on first. Widgery admitted that the soldiers' firing "bordered on the reckless". Many eyewitnesses were not called and testimony was not taken from wounded survivors. The interpretation of forensic evidence was flawed. Widgery concluded from firearms residue found on swabs taken from the bodies of the deceased that they had been in close contact with firearms. ...read more.

The matter is too far gone for there to be any hope of reconciliation between the Nationalists and the British Government, in my opinion. However it may help the families of the deceased finally understand why their loved ones died. In 1997 the Irish Government handed a detailed dossier of evidence to the British detailing fresh information about the shootings - as well as a damning indictment of the Widgery report. The British could no longer ignore the cries. In 1998 PM of the UK Tony Blair announces that there will be a new independent, judiciary inquiry into the events of b****y Sunday. It is too be headed by Lord Saville, accompanied by two commonwealth judges. The inquiry is already into it's 5th year, with out an end in the distance, Nationalists are become more and more agitated at the delay in findings. ...read more.