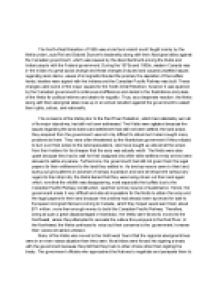 Canadian History. The NorthWest Rebellion of 1885

﻿The North-West Rebellion of 1885 was a brief and violent revolt fought mainly by the Metis under Louis Riel and Gabriel Dumont?s leadership along with their Aboriginal allies against the Canadian government, which was caused by the discontentment among the Metis and Indian people with the Federal government. During the 1870s and 1880s, western Canada was in the midst of a great social change and these changes included and caused:unsettled issues regarding land claims, waves of immigrants flooded the prairies, the depletion of the buffalo herds, treaties were signed with the Indians and the Canadian Pacific Railway was built. These changes were some of the major causes for the North-West Rebellion, however it was sparked by the Canadian government?s continuous indifference and denial to the frustrations and pleas of the Metis for political reforms and desire for equality. Thus, as a desperate reaction, the Metis along with their aboriginal allies rose up in an armed rebellion against the government to assert their rights, culture, and nationality. The concerns of the Metis prior to the Red River Rebellion, which had ostensibly won all of its major objectives, had still not been addressed. The Metis were agitated because the issues regarding the land claims and settlement had still not been settled; the land scrips they acquired from the government was not only difficult to obtain but it also brought many problems to them. ...read more.

It was also made very obvious that there was very little to no room for negotiation. Thus, many aboriginal tribes signed the treaty but not without the promise that the Canadian government would provide them one-hundred sixty acres of land for every family of five as well as equipment, supplies and instruction in farming techniques. Unfortunately, the government had no intention of following through to their end of the bargain. None of what was promised to them materialized, causing them to starve and be completely dependent on the government for survival. The Natives often had to go on with no food for a long time as they were not permitted to move around following what herds were left on the prairies. With the Native people close to starvation, the government promised to handout foods but only to those who were under a treaty and if they promised not to cause any trouble for the government. The food handouts was used to keep the Natives in check and under their control; if they dared to defy the government the Indian people would not received any food. The Metis shared what little they have with Natives, however it wasn?t nearly enough for all of them. They also tried to appeal to the government, but their efforts remained fruitless. ...read more.

Riel was found guilty of treason and was sentenced of death by hanging. On the other hand, the Indian chiefs were either pardoned or sentenced to a short prison time. The North-West rebellion was without a doubt a failure. It could be argued that, had the government only addressed the grievances of the Metis and Indian people and followed through their promises to them, the North-West rebellion would have not occurred and the matters with the Metis and Indian people would have been resolved peacefully. This rebellion was only a desperate reaction of the Metis and Indian people to the government's continued indifference towards their frustrations and grievances. The Metis and the Indian people would endure severe lasting consequences for this rebellion.Those who were directly involved suffered and experienced swift and direct consequences. However, the effects of this rebellion, were also felt throughout Canada which lingers on even today. The impacts of the the rebellion were multifaceted and served to progress and suppress various interests. For example, the rebellion widened the already existing rift between the French-speaking and English speaking Canadians, it also provided a rationale to finish the railway five years ahead of its due date. However, the most severe and long lasting effects were felt by the Metis as well as the Natives and their following generations because in the aftermath of losing their struggle for their rights, they were prejudiced and alienated by the government and European settlers on their own land, which today still permeates modern Canada. ...read more.