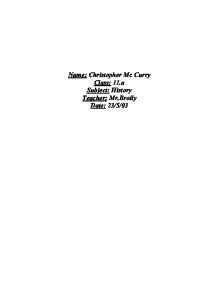 Name: Christopher Mc Curry Class: 11.a Subject: History Teacher: Mr.Brolly Date: 23/5/03 Causes of the 1916 Easter Rising. There were many rebellions throughout the years in Ireland against the British crown. Most of these rebellions were from 1803-1916. All of these rebellions were a complete failure apart from one significant rebellion, which was the Easter Rising of 1916. The rising was a military failure, but it gained a dramatic number of supporters for the nationalist movement from then onwards. There is no particular reason for the rising. There were a lot of events and background leading up to it but nothing can be directly blamed for it. There was a mix of both long and short term causes of the rising. There were many causes like the Home Rule Issue, the cultural revival, the resurfacing of the home rule issue, unionist opposition, the revival of the IRB, socialist activity and World War one which all had their part in the cause of the 1916 Easter Rising. In the period leading up to the First World War there had been a move towards Home Rule for Ireland. ...read more.

The riots went on even after Parliament rejected the Home Rule Bill. The riots were worse after parliament rejected the Home Rule Bill as workers left work early to celebrate. Workers went to the streets and burnt down catholic pubs and bate up a lot of catholic people in the streets. The riots went on for many weeks and by mid-September more than thirty people had been killed. There were few political changes in Ireland between 1890 and 1905. The conservatives were in power most of the time. The Conservatives supported the Union and they introduced important land reforms to Ireland. This period of Conservative power was interrupted in 1892 when Gladstone and the liberals came back to power. The following year Gladstone tried to bring in Home Rule for the second time and once again unionists of Ulster organised an energetic campaign against it. The House of Commons passed the Home Rule Bill in 1893. However, the House of Lords, which were dominated by Conservatives, had the power to stop Home Rule. A year later Gladstone retired, having failed in his mission to set up a Home rule parliament for Ireland. ...read more.

As long as a Conservative government remained in power there would be no Home Rule for Ireland. After many years of Conservative power, the Liberals won a great victory in the 1906 General election but it was not until 1912 that a third Home Rule Bill was introduced. In 1912 the government introduced a Home Rule Bill in the commons as they had promised, and the reduced power of the House of Lords meant it would become law in 1914. Nationalists were delighted, as it seemed that the Dublin parliament would be restored. The tension in Ireland was high when a small group of nationalists led by Patrick Pearse took control of central Dublin. They saw England's difficulty as Irelands opportunity as England had many soldiers away fighting overseas. This was a suicide mission for these young rebels and the British soldiers soon defeated them. It can be said that there is no one reason for the Easter Rising of 1916 and that no one event leading to it can be blamed as all the events leading up to it like failure of home rule, tradition of rebellion, cultural revival and the outbreak of world war one all played there own significant part for the Easter Rising of 1916. ...read more.