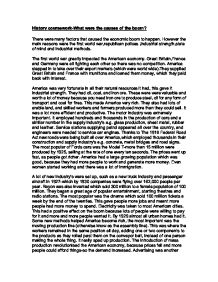 Causes of the boom

History coursework-What were the causes of the boom? There were many factors that caused the economic boom to happen. However the main reasons were the first world war,republican polices ,industrial strength,state of mind and industrial methods. The first world war greatly impacted the American economy. Great Britain,France and Germany were all fighting each other so there was no competition. America stepped in to take over their export markets (which were world wide).They supplied Great Britain and France with munitions and loaned them money, which they paid back with interest. America was very fortunate in all their natural resources it had, this gave it industrial strength. They had oil, coal, and iron ore. These were were valuable and worth a lot of money because you need iron ore to produce steel, oil for any form of transport and coal for fires. This made America very rich. They also had lots of arable land, and skilled workers and farmers produced more than they could sell. It was a lot more efficient and productive. The motor industry was extremely important. It employed hundreds and thousands in the production of cars and a similar number in the supply industry's e.g. ...read more.

Advertising was another method that was good for the economy, because it persuaded people to buy more things. However propaganda campaigns were redirected towards selling consumer goods. This started a consumer boom based on telephones, radios, vacuum cleaners and washing machines. Hoover and Kodak became household names. People made use of posters, radio advertisements and adverts at the cinema and would tour the country demonstrating products. The American government was republican in the 1920's. They believed in laissez faire, which meant they didn't get involved in the working of the economy. This policy helped the economy because they weren't hampering productivity or creativity through a range of regulations, but let the economy grow. Another policy the government had was protectionism. This meant they put high import taxes on foreign goods e.g. In 1922 Harding introduced the Fordney-McCumber tariff which made it expensive to import food in the USA. This isolationism helped the economy because it protected American businesses against foreign competition, and allowed American companies to grow rapidly. The republican government passed anti-union laws. This helped business because there were no workers campaigning for higher pay. So it made businesses richer and more successful. A very popular policy was low domestic taxes. ...read more.

There is no definitive cause that was the start of all five of these reasons, but they are all linked and some have been caused by others. The first world war caused peoples state of mind to change as they became more confident when they saw the amount of money the war was helping them gain. Industrial strength and new industrial methods also caused people to grow in confidence, and industrial strength caused new industrial methods and ideas to speed up the production process. Republican policies hugely impacted the growth of industrial strength, as they helped industry's grow, protected them from foreign competition, and helped them to keep their workers down. State of mind also caused industry's to grow, as people were a lot more eager to purchase shares in the stock market and reinvest their money in businesses because of their confidence in the economy and the stock market. I think the most important cause of the boom was the first world war. This is because America made lots of money supplying Great Britain and France with munitions and other goods as well as lending them money. They took over world wide export markets and made a huge amount of profit, which then caused peoples to become more confident, and that contributed to many more things. By Rachel. Hodgkinson ...read more.