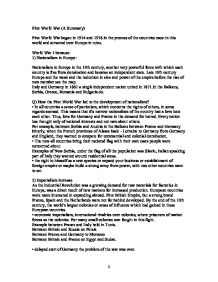 First World War (A Summary) First World War began in 1914 and 1918.In the process of the countries most in this world and attracted over Europe in ruins. World War 1 because: 1) Nationalism in Europe: Nationalism in Europe in the 19th century, another very powerful force with which each country is free from domination and became an independent state. Late 19th century Europe and the weak and the reduction in size and power of the empire before the rise of new member see the map. Italy and Germany in 1861 a single independent nation united in 1871.In the Balkans, Serbia, Greece, Romania and Bulgaria do. Q) How the First World War led to the development of nationalism? � In all countries a sense of patriotism, which concerns the rights of others, in some regards seemed. This means that if a narrow nationalism of the country had a love hate each other. Thus, love for Germany and France in the demand for hatred. Every nation has thought only of national interests and not care about others. For example, between Serbia and Austria in the Balkans between France and Germany bitterly, when the French provinces of Alsace back - Lorraine to Germany from Germany and England, they wanted to compete for commercial and colonial domination. ...read more.

4 troops) or the arms race: For the development of nationalism and imperialism, running for a natural compatible weapons. Germany is the largest and emerged with strong forces between the undisputed queen of the sea, while the United Kingdom. � \ Hostilities between England and Germany � For more arms were strengthened because of their race. In naval superiority there was unfair competition. For the construction of each ship in Germany, Britain produced both. The latest threat to the security seen in Germany. � Armed Forces military side of government officials, a situation that is not conductive to peace through the power are many. 5 German responsibility). � Germany entered the field later in 1871.But creation of late, with great power and nationalism, because of rapid industrial development of electricity from the genius of his army and overcame several major contenders to win more with the colonies. This powerful countries such as Austria and France won. Growing stronger state power � Kaiser William II, emperor of Germany who was arrogant and wanted to make Germany the world. Balkan region in crisis intervention, and conflict with Russia to expand naval strength, was at loggerheads with England. ...read more.

� May 1915 - Italy Austria Hungary declared war. Although signed by the Triple Alliance, Italy and was sitting on the fence to wait and see attitude to determine from which could most benefit. He joined Allied in 1915. � 1917 - Russian Russian Tsar Nicholas II Revolution threw out the outbreak and the new Russian government and 1917.The war Romonovs withdrew from the peace treaty signed with Germany. Germany's position was strong and seemed to win. A?????? 1917 � - The U.S. joins the war. A telegram from Germany to Mexico, where British agents were arrested in Mexico and asked the central authority of the United States declared war on the territory of the United States had promised. At the end of the war. First World War was a long, almost 4 years for a permanent war. It ended on November 11, 1918 when Germany signed a treaty to slow after seeing that all alone with none of the allies left. After a conference in Paris to define the terms of the peace agreement on June 28, 1919, Versailles Treaty signed between Germany and the victorious Allies. Different circumstances, also, Austria, Hungary, Turkey and Bulgaria signed on. 5 in all the circumstances of the peace agreement known as 1919-1920. ?? ?? ?? ?? 1 ...read more.