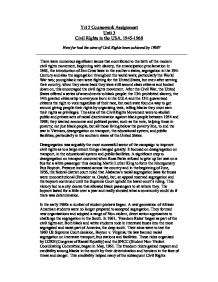 Yr12 Coursework Assignment Unit 3 Civil Rights in the USA, 1945-1968 How far had the aims of Civil Rights been achieved by 1968? There were numerous significant issues that contributed to the birth of the modern civil rights movement, beginning with slavery, the emancipation proclamation in 1863, the introduction of Jim Crow laws in the southern states, segregation in the 19th Century and also the segregation throughout the world wars; particularly the World War two; young black men were fighting for the United States, but even after serving their country, when they came back they were still second class citizens and looked down on, this encouraged the civil rights movement. After the Civil War, the United States offered a series of amendments to black people: the 13th prohibited slavery, the 14th granted citizenship to everyone born in the U.S.A and the 15th guaranteed citizens the right to vote regardless of their race, but each state found a way to get around giving people their rights by organising tests, telling blacks they must earn their rights as privileges. The aims of the Civil Rights Movement were to abolish public and private acts of racial discrimination against black people between 1954 and 1968; they wanted economic and political power, such as the vote, helping those in poverty; not just black people, but all those living below the poverty line, to end the war in Vietnam, desegregation on transport, the educational system, and public facilities, particularly in the southern states of the United States. Desegregation was arguably the most successful sector of the campaign to improve civil rights as to a large extent things changed greatly. ...read more.

Integration was chosen in Little Rock in Arkansas rather than in the heart of the South because the deep southern states were extremely racist and segregated, where as, Little Rock was a supposedly a rather progressive southern state; unfortunately this was not the case, and the nine black students who sued for the right to attend a mixed school were viciously attacked. The students were able to attend school although they had to suffer spitting, harassment, and racial slander. The Little Rock incident showed how determined a number of people where to retain segregation and the challenge that the civil rights movement had to face. However, the progress went slower than expected and still did not manage to integrate schools by 1957; in fact only 12% of the 6300 school districts in the south were desegregated. By 1965 the desegregation aims had been achieved and the civil rights movement turned to the unfairness in the voting system. There were various campaigns to support the right for the vote, for example Selma and the Voting Rights Act. Various campaigns came in to order to claim the vote, one of which being Selma; King came to Selma to lead a number of marches, at which they were met by violent resistance from the authorities and he was arrested along with 250 other demonstrators. Leaders of the SCLC and SNCC led a march of 600 people from Selma to Montgomery, but the peaceful protesters were viciously attacked just a few blocks into the march by local police carrying clubs, gas, barred wire and other such weapons. ...read more.

There had been several successes, such as the Albany movement in 1962 which organised huge sit-ins and marching campaigns, the March on Washington at the Lincoln Memorial, where King delivered his 'I Have A Dream' speech, the Birmingham campaign, Selma, the passing of the Civil Rights Act, banning discrimination in public facilities, the Voting Rights Act, and the anti-discrimination demonstrations in Chicago. Even though all this progress had been made, much of the Deep South still remained segregated. It could be argued that the civil rights movement saw their most successful years between 1963 and 1965, where the most was done to fulfil the aims of the movement. Even the early 1960s, with the sit-ins, freedom rides, and the Albany Campaign, could be considered a success, or, at least a starting point in securing desegregation, but, as America went into the late 1960s and the war in Vietnam arose, the movement began to fall apart. King spoke out against the US's role in Vietnam and said that it was taking money away from the social problems, thus, relations with President Johnson deteriorated. The mass media had turned against King and black people were becoming restless with non-violent tactics, thus moving to a more militant approach and losing the respect and support of the whites. Even though the Civil rights Movement 'fell apart' towards the end, it could be argued that it indeed achieved its goals. It ended segregation on a whole, black people had the right to vote and although it was not entirely successful in ending the war on poverty for both black and white American's, it did begin to tackle the issue, and perhaps if the US had not become involved with the Vietnam war, the Great Society Programme may of dealt with the economic and social issues. (2761 words) ...read more.