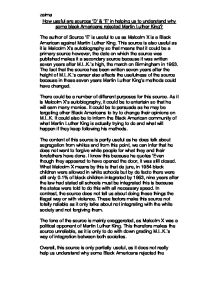 How useful are sources 'D' & 'E' in helping us to understand why some black Americans rejected Martin Luther King? The author of Source 'E' is useful to us as Malcolm X is a Black American against Martin Luther King. This source is also useful as it is Malcolm X's autobiography so that means that it could be a primary source however, the date on which the source was published makes it a secondary source because it was written seven years after M.L.K.'s high, the march on Birmingham in 1963. The fact that the source has been written seven years after the height of M.L.K.'s career also affects the usefulness of the source because in these seven years Martin Luther King's methods could have changed. There could be a number of different purposes for this source. As it is Malcolm X's autobiography, it could be to entertain so that he will earn many monies. ...read more.

In contrast, the source does not tell us about doing these things the illegal way or with violence. These factors make this source not totally reliable as it only talks about not integrating with the white society and not forgiving them. The tone of the source is mainly exaggerated, as Malcolm X was a political opponent of Martin Luther King. This therefore makes the source unreliable, as it is only to do with down grading M.L.K.'s way of integration between both societies. Overall, this source is only partially useful, as it does not really help us understand why some Black Americans rejected the methods of Martin Luther King. This is mainly because the source only talks about one of the factors in M.L.K.'s method, integration, and why Malcolm X rejected it. The origin of source 'D' is partly useful as the source was written by Martin Luther King and he himself may have actually understood why some Black Americans rejected him. ...read more.

What Martin Luther King is trying to get across here is that some Black Americans were using violence and they should stop, as it will get them nowhere. We also learn that from the quote that people are using violence and rejecting his methods but we still do not know why they did this, as it does not mention anything about their reasons against M.L.K. The tone of this source is emotional as well as being factual. It is emotional as he talks in a way that people will start to get people to think about how his methods work and what they will gain if they support him. The tone is also quite factual as it is also trying to say in a sly way that people should stop the violence, as that is what is happening de facto. Overall, I would say that this source is only partly useful as it only tells us that there was violence but not the reasons for it and doing things the legal way. ?? ?? ?? ?? zaima ...read more.