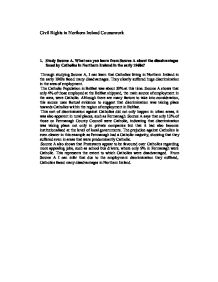 Civil Rights in Northern Ireland Coursework 1. Study Source A. What can you learn from Source A about the disadvantages faced by Catholics in Northern Ireland in the early 1960s? Through studying Source A, I can learn that Catholics living in Northern Ireland in the early 1960s faced many disadvantages. They clearly suffered huge discrimination in the area of employment. The Catholic Population in Belfast was about 30% at this time. Source A shows that only 4% of those employed at the Belfast shipyard, the main source of employment in the area, were Catholic. Although there are many factors to take into consideration, this source uses factual evidence to suggest that discrimination was taking place towards Catholics within the region of employment in Belfast. This sort of discrimination against Catholics did not only happen in urban areas, it was also apparent in rural places, such as Fermanagh. Source A says that only 13% of those on Fermanagh County Council were Catholic, indicating that discrimination was taking place not only in private companies but that it had also become institutionalised at the level of local governments. The prejudice against Catholics is even clearer in this example as Fermanagh had a Catholic majority, showing that they suffered even in areas that were predominantly Catholic. Source A also shows that Protestants appear to be favoured over Catholics regarding more appealing jobs, such as school bus drivers, where only 9% in Fermanagh were Catholic. This represents the extent to which Catholics were disadvantaged. From Source A I can infer that due to the employment discrimination they suffered, Catholics faced many disadvantages in Northern Ireland. 2. Study Sources A, B and C. How far does the evidence of Sources A, B and C suggest that there was anti-Catholic prejudice in Northern Ireland? Sources A, B and C all concur with each other to suggest that there was an extremely high level of anti-Catholic prejudice in Northern Ireland. ...read more.

This unfair distribution of power gave the Catholics nowhere to turn to, as they couldn't escape the unfair situation because they had no influence. The Civil Rights movement was established one year after this as an effort to stop unfair practises like gerrymandering and promote equality for both communities. More and more Catholics in Derry turned to the movement for help and the movement was attracted to Londonderry because of the vastly corrupt system there, which was in need of change. The Apprentice Boy's March is an important Protestant march, which takes place in Derry, commemorating a victory over the Catholics. Whilst it is a celebration for Protestants it also causes huge problems between the two communities because the march takes place along a route overlooking the Catholic district. This frequently resulted in violence, especially in 1969 when the violence led to The Battle of the Bogside, consequentially creating more demand for peace and the objectives of the Civil Rights movement in Derry. The Civil Rights movement had a lot of presence in Londonderry right from the start, the city remained a source of unrest and demands for reform. After a series of violent demonstrations in Derry, notably the 1969 civil rights march from Belfast to Derry, which was ambushed at Burntollet Bridge, the civil rights movement was triggered to centre their demonstrations there. Many Catholics in Derry felt that the police offered them no protection from sectarian violence, and even felt them more of a threat at times. They turned to the movement, which was predominantly Catholic, for a sense of safety. Derry also became a city centrally related with the Civil Rights movement because of b****y Sunday in 1972, when the British Army opened fire on unarmed civil rights protestors in Derry, killing thirteen civilians, all of them Catholic. Catholics deeply resented how the police authorities handled this incident and it pushed them even further towards the sanctuary of the movement. ...read more.

The writing and graffiti on the walls is also significant in portraying the reasons why the troubles continued into the 1990s. One side has 'REM 1690' scrawled across it to remind Protestants of when William of Orange defeated the last Catholic British King and to remind Catholics of their defeat. It was from 1690 onwards that discrimination against Catholics became part of the law; no Catholic could be the British monarch, no Catholic could own land and no Catholic could hold an important military or political position. This is continually reiterated to the Catholics through Protestant Orange Marches in Catholic towns, often resulting in violence and causing more trouble. The graffiti says 'Ulster Says No,' a well-known Unionist slogan, which portrays an aggressive, siege mentality, contributing to the divisions already faced by people. These historic differences are still continued today by this sort of graffiti and other displays like political murals. I agree with what the cartoon is saying about how, if people cannot leave their historic differences in the past, then little progress will ever be made. On the other side of the wall '1916' is written to remind Catholics of the Easter Rising, where, for a short time, the Catholics overcame the British troops and declared their proclamation of an independent Irish republic. It also reminds them of the brutality of the British Government who shot the leaders of the rising, increasing the animosity between the two sides and making Catholic martyrs. The significance of this is similar to the other graffiti; if people cannot try to put their differences behind them, then the troubles will continue for a long time to come. Putting all these different people into the same circle indicates that they are all related to one another actions; political changes can cause paramilitary unrest, paramilitary violence can affect innocent children. I agree with this interpretation of the reasons why the problems in Northern Ireland have continued for so long, it shows how the troubles have become so much part of society that they will take a long, long time and many changes to cease. ...read more.