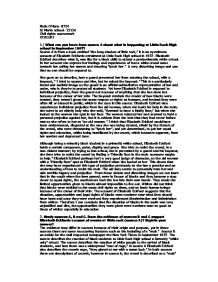 Katie O'Hara- 8720 St Marks school- 13156 Civil rights coursework 07/02/02 1.) What can you learn from source A about what is happening at Little Rock High school in September 1957? Source A is from a book entitled "the long shadow of little rock," it is an eyewitness account of Elizabeth Eckfords enrolment at Little Rock High school in 1957. Elizabeth Eckford describes what it, was like for a black child to attend a predominately white school. In her account she express her feelings and experiences of how a white crowd came towards her calling her names and shouting "lynch her." A very disturbing image and one that no one should be exposed to. She goes on to describe, how a guard prevented her from entering the school, with a bayonet, " I tried to squeeze pat him, but he raised the bayonet." This is a particularly brutal and sadistic image as the guard is an official authoritative representative of law and order, who is they're to protect all students. Yet here Elizabeth Eckford is exposed to individual prejudice, from the guard not because of anything that she has done but because of the colour of her skin. The bayonet reminds the reader of how blacks were treated, they weren't given the same respect or rights as humans, and instead they were often hit or abused in public, which is the case in this source. Elizabeth Eckford also experiences individual prejudice from the old woman, when she looks for help in the mob; she turns to an elderly lady who she said, "Seemed to have a kindly face," but when she looked at the woman she spat in her face. The women rejected her and seemed to hold a personal prejudice against her, but it is evident from the text that they had never before met as she refers to her as "an old woman." ...read more.

Martin Luther King as he said in his famous "I have a dream speech" was to live in harmony where there would be an end to racial injustice and where "the sons of former white slave owners could sit together at the table of brotherhood" and where people "would not be judged on the colour of their skin, but on the content of their character." King wants a shared society, an equal society and integration of all, and in source D, he puts an emphasis on the need for non-violence "when he starts violence, he is blamed for the consequences." However Malcolm X, and other "black power" leaders such as Carmichael felt the need for a separatist, extremist approach to the battle of civil rights. In Source F Malcolm X speaks of a Black revolution "the Negro revolt will merge into one world wide black revolution" and its consequences "Revolutions will overturn systems." Martin Luther King takes a more realistic approach to civil rights, as he concentrates on one thing at a time such as voting in the south, and once he has achieved this, he moves on. However, Malcolm X is Source F discusses a "worldwide revolution," his plans are on a huge scale and he is impracticable in his advance on civil rights. Martin Luther King and Malcolm X had very different childhood experiences; this may explain one of the reasons why their tactics differed. In comparison to Malcolm X, Martin Luther king had a very good childhood; he was intelligent and had a good education, which was strange for black children of that time period. Martin Luther king jr. was born in Atlanta, Georgia on January 15, 1929. His father, was the priest of the Ebenezer Baptist church, and his mother was a schoolteacher. Martin also had a younger brother, and an older sister. Martin learned about racism at an early age. ...read more.

The civil rights movement bought an end to most of the injustice that was inflicted upon most blacks and I hope that Martin Luther King knows his dream of "that the former slave owners and the former slaves will sit together at the table of brotherhood." 7.) Study all sources. The author of source L believed that television played a huge part in ending segregation in the USA. Use the sources and your own knowledge to explain if you agree with this view? African Americans have been struggling for equality for many decades. It only seems that during the 1960's is when there were actual significant advances made. This was about the same time that civil rights came into the political scene . Throughout the South, Blacks were still in the majority, but had no political power what so ever. The Civil Rights Movement gave African Americans a voice and a chance to make a difference. All the civil rights movements were broadcasted on television, which was very effect full. American, after seeing his/her TV screen, turned into a Civil Rights supporter. Black unity and white support continued to grow as the events of civil rights movement was broadcast in their homes. After the war, America was prosperous and so many people could afford the latest technology such as televisions. Martin Luther Kings studying of Gandhi, who believed in truth and love, and a refusal to harm someone else, influenced King. As a practising Baptist, Martin Luther King was also a strong believer in the notion of love, and non-violence. As a one of the main civil rights leaders the protests that he held were all non-violent such as the protest in Birmingham, Alabama or Selma, Alabama. Yet this was not always the case for the whites in response to the non-violent protest often resulted in violence. This violence spilled across TV screens nationwide. The average, neutral American, after seeing his/her TV screen, turned into a civil rights. In Birmingham, Alabama ...read more.