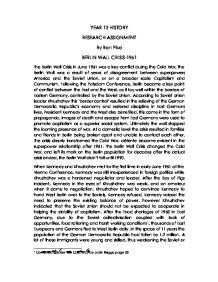 YEAR 12 HISTORY RESEARCH ASSIGNMENT By Ben Pike BERLIN WALL CRISIS-1961 The Berlin Wall Crisis in June 1961 was a key conflict during the Cold War, the Berlin Wall was a result of years of disagreement between superpowers America and the Soviet Union, or on a broader scale Capitalism and Communism. Following the Potsdam Conference, Berlin became a key point of conflict between the East and the West, as it lay well within the borders of Eastern Germany, controlled by the Soviet Union. According to Soviet Union leader Khrushchev this 'border control' resulted in the relieving of the German Democratic Republic's economy and restored discipline in East Germans lives. President Kennedy and the West also benefited, this came in the form of propaganda, images of death and escape from East Germany were used to promote capitalism as a superior social system. Ultimately the wall stopped the looming presence of war. At a domestic level the crisis resulted in families and friends in Berlin being broken apart and unable to contact each other. The crisis clearly transformed the Cold War, d�tente became evident in the superpower relationship after 1961. The Berlin Wall Crisis changed the Cold War, and left its mark on the Berlin population for decades after the actual crisis ended, the Berlin Wall didn't fall until 1990. ...read more.

The West protested against the construction of the wall, but did not take any military action. Even though the Berlin Wall Crisis was of great significance in the Cold War, it did not have a great domestic impact outside of Germany and more significantly Berlin. After the construction of the wall West Berliners felt abandoned and isolated. Led by Mayor Brandt, residents of West Berlin demonstrated at the wall, Brandt also criticised the US for failing to respond to the breaking of all prior agreements promoting free access throughout Berlin. America was aware that West Berlin was completely surrounded by the Soviet Union, and realistically was only defendable by nuclear weapons. Kennedy responded to the drop in morale on the 16th of August by giving the order for a show of strength by marching 1500 men into West Berlin from West Germany. East German police and soldiers observed and took a head count, but did nothing to stop the columns proceeding. The reinforcements brought a sense of relief to the West Berliners, it appeared that America had stood by her promise to not permit the communists taking over Berlin. Russia also moved 5 divisions of troops in a covert operation to the Berlin Area. ...read more.

The barrier relieved tensions between the nations, and stoped suspicions of a military takeover of West Berlin. From America's perspective, the wall meant that Khrushchev wasn't planning a forceful occupation of Berlin. President Kennedy summarised the Berlin Wall, "It's not a very nice solution, but a wall is a hell of a lot better than a war". The Berlin Wall Crisis, a flashpoint in the Cold War and the resulting construction of the Berlin Wall, was a major point of conflict and resolution between the United States and the Soviet Union. The wall created a major disruption for residents of Berlin, particularly East Berliners, but became a positive outcome for the rest of the world. Military conflict between the superpowers was avoided by the 96 miles of 13ft wall that enclosed West Berlin. It solved the Eastern Bloc's loss of valuable human capital and subsequent economic problems and also meant Khrushchev could maintain the allusion of the Soviets having vast amounts of nuclear weaponry. America did not protest to heavily as it gave them a point of propaganda against communism, Kennedy was able to keep his promise to not let West Berlin fall, and a devastating war was avoided. The outcome of the Berlin Wall Crisis was a significant decrease in hostilities between the world's superpowers, through the simplicity of a physical barrier. ...read more.