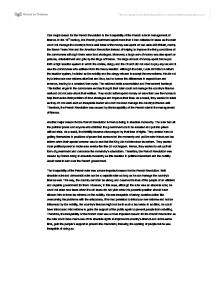 Collapse of the Qing Dynasty

One major reason for the French Revolution is the incapability of the French ruler in management of finance. In the 18th century, the French government spent more than it had collected in taxes as the ruler could not manage the country's funds well. Most of the money was spent on two wars with Britain, mainly the Seven Years War and the American Revolution instead of helping to improve the living conditions of the commoners although there were food shortages. Moreover, a large sum of money was also spent on palaces, entertainment and gifts by the kings of France. The large amount of money spent hence put forth a high taxation system in which the nobles, clergy and the Church did not need to pay any tax and it was the commoners who suffered from the heavy taxation. ...read more.

As a result, they wanted to rebel as they did not want such an incapable leader who cold not even manage the country's finance well. Therefore, the French Revolution was caused by the incapability of the French ruler in the management of finance. Another major reason for the French Revolution is France being in absolute monarchy. The ruler had all the political power and anyone who criticized the government could be arrested and put into prison without trials. As a result, the Nobility became discouraged by their loss of rights. They worked hard at getting themselves in positions of power that surrounded the monarchy and yet the ruler introduced tax reform when their special concern was to see that the King did not introduce tax reform. ...read more.

He was incapable of strong decisive action like overcoming his problems with the aristocracy. If he had persisted to introduce new reforms and not be influenced by the nobility, the country's finance might not be in such a bad state. In addition, he could have introduced mild reforms to gains the support of the public again to prevent people from rebelling. Therefore, the incapability of the French ruler was a more important reason for the French Revolution as the ruler could have made use of his absolute rights to improve the country's finance and at the same time, gain the people's support to prevent the discontent, following the uprising of people but he was incapable of doing so. ...read more.