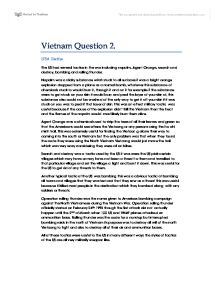 Compare the tactics of the two sides in the Vietnam War.

Vietnam Question 2. USA Tactics The US had several tactics in the war including napalm, Agent Orange, search and destroy, bombing and rolling thunder. Napalm was a sticky substance witch stuck to all surfaces it was a bright orange explosion dropped from a plane as a normal b**b, whatever this substance of chemicals stuck to would burn it, through it and on it for example if the substance were to get stuck on your skin it would burn and peal the layer of your skin of, this substance also could not be washed of the only way to get it off your skin if it was stuck on you was to peal if that layer of skin. This was an effect military tactic was useful because if the cause of the explosion didn't kill the Vietnam then the heat and the flames of the napalm would most likely burn them alive. ...read more.

This was useful for the US to get rid of any threats to them. Another typical tactic of the US was bombing this was a obvious tactic of bombing all towns and villages that they wanted and that they saw as a threat this was useful because it killed most people in the destination which they bombed along with any soldiers or threats. Operation rolling thunder was the name given to Americas bombing campaign against the North Vietnamese during the Vietnam War. Operation rolling thunder officially started on February 24th 1995 though the first attack did not actually happen until the 2nd of March when 100 US and VNAF planes attacked an ammunition base. Rolling thunder was the code for a nonstop but interrupted bombing raids in the north of Vietnam its purpose was to destroy all will of the north Vietcong to fight and also to destroy all of their air and ammunition bases. ...read more.

go out another entrance to that tunnel and go behind the Americans and kill them from behind the Vietcong did have some weaponry supplied by Russia but they were mainly all guerrilla warfare fighters. This Tactic was very good and killed many Americans it also put the Vietcong out of danger by them not being in range of gunfire while the booby traps go of so the Americans cannot react. Ho chi minh trail was a trail used by the Viet Cong to get from the north of Vietnam into the south the ho chi minh went through Cambodia a Laos this was very useful as if the South Vietnamese found the ho chi minh trail it could be moved very easily and quickly and the south vitnamses would have to find it again and if they found it again, again it would be moved. Stephen Rodwell. ...read more.