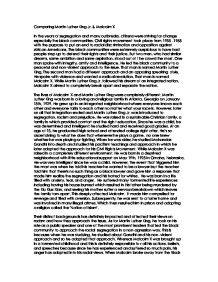 Comparing Martin Luther King Jr. & Malcolm X In the years of segregation and many outbreaks, citizens were striving for change especially the black communities. Civil rights movement took place from 1955-1968 with the purpose to put an end to racial discrimination and opposition against African Americans. The black communities were extremely auspicious to have had people step up to defend their rights and their justice. But two men, who had similar dreams, same ambition and same aspiration, stood out of the crowd the most. One man spoke with integrity, amity and intelligence. He led the black community to a peaceful and non-violent approach to the issue. That man is named Martin Luther King. The second man had a different approach and an opposing speaking style. He spoke with violence and wanted a radical revolution. That man is named Malcolm X. While Martin Luther King Jr. followed his dream of an integrated nation, Malcolm X aimed to completely break apart and separate the nation. The lives of Malcolm X and Martin Luther King were completely different. Martin Luther King was born in a loving and religious family in Atlanta, Georgia on January 15th, 1929. He grew up in an integrated neighborhood where everyone knows each other and everyone talks to each other no matter what your race is. ...read more.

He's prepared for neglects, and pain, because of the violence in his family that's why he adopted the violent approach to his leadership. Martin Luther king Jr.'s and Malcolm X's ideas and theories are very distinct. King's idea was to approach the situation in a non-violent protest. For example, when he led the Montgomery Bus Boycott in 1955 which was a campaign to go against the racial segregation with transportations and public transit systems, non-violently. He was also a preacher, he would preach about Gandhi's theory, about integration and equalities of blacks and whites. His theory was to win the whites with respect. He wanted to show the whites that blacks are just like the whites, with their integrity, determination, leadership skills, and with high moral standards. The differences between Malcolm X's and Martin Luther King's ideas are that Martin wants peace from integration while Martin wants peace by separation. Malcolm X tends to go forward with his violent and direct approach more. When he was an Islamic minister, he would preach about the segregation of blacks and whites. He didn't like the idea of the Civil Rights Movement and the non-violent approach. He did not like how blacks would want to integrate with the whites when they don't even like the blacks anyways. ...read more.

He says it in his perspective which enables us to explore a different side of the story. The audiences Malcolm X would be projected on blacks because his speeches would be for a black's perspective. Whereas, Martin Luther King Jr. would target the whites and blacks everywhere because he wanted to compromise the situation through his speech. Although they have their different philosophies and ways of approaching to racism, but there is one thing they share, they share the same dream. A dream to bring freedom to the citizens of African Americans. A dream to end all the prejudice and racism. A dream they never got to see. Martin Luther King Jr. was assassinated on April 4, 1968 and Malcolm X was assassinated on February 21, 1965. They both know and deem that the blacks have suffered enough and it's time for justice. They acknowledge the existent of racism and want to put a stop to it no matter how hard it is or the risks they need to take. I honor both these two men with high appreciation, because not only did they impact the citizens of America, but they also changed the perspective of the whole world and gave us a different view to the story. Martin Luther King and Malcolm X were leaders who fought for their rights, their justice, and their hope for peace. ...read more.