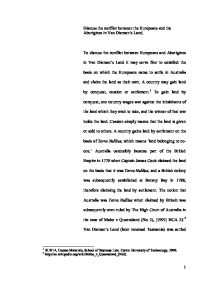 Conflict between Europeans and Aborigines in Van Diemen's Land

Discuss the conflict between the Europeans and the Aborigines in Van Diemen's Land. To discuss the conflict between Europeans and Aborigines in Van Diemen's Land it may serve first to establish the basis on which the Europeans came to settle in Australia and claim the land as their own. A country may gain land by conquest, cession or settlement.1 To gain land by conquest, one country wages war against the inhabitants of the land which they wish to take, and the winner of that war holds the land. Cession simply means that the land is given or sold to others. A country gains land by settlement on the basis of Terra Nullius, which means 'land belonging to no-one.' Australia ostensibly became part of the British Empire in 1770 when Captain James Cook claimed the land on the basis that it was Terra Nullius, and a British colony was subsequently established at Botany Bay in 1788, therefore claiming the land by settlement. The notion that Australia was Terra Nullius when claimed by Britain was subsequently over-ruled by The High Court of Australia in the case of Mabo v Queensland (No 2), [1992] HCA 23.2 Van Diemen's Land (later renamed Tasmania) was settled by the British in 1803 at Hobart Town.3 Historians are clearly divided on the subject of conflict between the Europeans and the Aborigines and, to gain a balanced view on the subject, it is necessary to establish the basis of this debate in the present day. ...read more.

It would seem somewhat inevitable that pressure on their culture and their existence would lead to a change in the attitude of the Aborigines to the Europeans and this is recorded by Governor Arthur: "Over a substantial period of time they had evinced a growing spirit of hatred, outrage and enmity against the settlers" 19 The inevitability of war between the Europeans and the Aborigines in Van Diemen's Land is supported by historian Henry Reynolds who writes 'Hence the meeting of the white and Black races in Australia, considered generally, results in war.'20 The period from 1824 through to the early 1830's saw what is generally termed the 'Black War' between the Aborigines and the settlers. While there had long been occasional attacks on Europeans by Aborigines an increased number of attacks from 1824 lead to the introduction of martial law in Van Diemen's Land, lasting from November 1828 to January 1832.21 What this meant to the Aborigines was that the military conducted small scale operations against them and had the authorisation to arrest or shoot any Aborigine on sight.22 Further to this, a bounty of five pounds for adults and two pounds for children was introduced in 1830.23 Some Europeans saw Aboriginal attacks on settlers to be '...the result of their inherent "wanton and savage spirit."'24 This explanation may not explain an increase in attacks, however, an Aboriginal leader, Umarrah, is reported to have stated that murders of settlers had occurred because of the Aborigines ...read more.

of what is considered to be the start of the killing of the Aborigines of Van Diemen's Land: the 'Risdon Massacre' of 1804. The death toll from this 'Massacre' is put at three by Windschuttle, with an explanation given for reports of 'up to fifty' dead.43 The History Wars between historians in the present day may be seen as an indication of how the fact and details of history can become altered over time and in this case perhaps distorted in some misguided attempt at providing a suitable picture of the past. In the case of Van Diemen's Land the how and why of history may have been altered or misused but the tragic outcome for the Aborigines cannot be denied. It would appear that the two cultures, European and Aboriginal were incompatible. Culture would seem to encompass not just how the inhabitants (settler or indigenous) use the land but the attitudes of the inhabitants to others. Neither culture appeared to be either willing or able to come to a suitable accommodation when it was needed and before it was too late, so there appears to be a strong case to argue that the destruction of one society by another was inevitable. The events following the settlement of Van Diemen's Land in 1803 appear to leave little doubt that, all disputes amongst historians aside, the entire full-blooded Aboriginal population was destroyed due to either violent conflict or neglect of their interests in one way or another. ...read more.