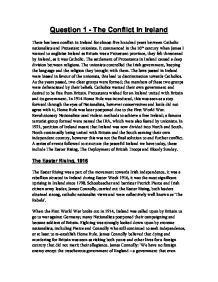 Question 1 - The Conflict In Ireland There has been conflict in Ireland for almost five hundred years between Catholic nationalists and Protestant unionists. It commenced in the 16th century when James I wanted to anglicise Ireland as Britain was a Protestant province, they felt threatened by Ireland, as it was Catholic. The settlement of Protestants in Ireland caused a deep division between religions. The unionists controlled the Irish government, keeping the language and the religion they brought with them. The laws passed in Ireland were biased in favour of the unionists, this lead to discrimination towards Catholics. As the years passed, two clear groups were formed; the members of these two groups were defrenciated by their beliefs. Catholics wanted their own government and desired to be free from Britain. Protestants wished for an Ireland united with Britain and its government. In 1914 Home Rule was introduced, this was seen as a step forward through the eyes of Nationalists, however conservatives and lords did not agree with it, Home Rule was later postponed due to the First World War. Revolutionary Nationalists used violent methods to achieve a free Ireland; a famous terrorist group formed were named the IRA, which were also feared by unionists. In 1921, partition of Ireland meant that Ireland was now divided into North and South. North continually being united with Britain and the South earning their own independent country, however this was not the final solution to end further conflict. A series of events followed to structure the peaceful Ireland we have today, these include The Easter Rising, The Deployment of British Troops and b****y Sunday. The Easter Rising, 1916 The Easter Rising was a part of the movement towards Irish independence, it was a rebellion situated in Ireland during Easter Week 1916, it was the most significant uprising in Ireland since 1798. Schoolteacher and barrister Patrick Pierce and Irish citizen army leader, James Connolly, carried out the Easter Rising, both leaders obtained strong, catholic nationalist views and were collectively well known as 'The Rebels'. ...read more.

Northern Ireland was the poorest part of the UK. Britain did not give enough money to overcome the problems of poor housing, poor health, education and unemployment. But in 1945 Britain began the Welfare State, This provided services such as free healthcare. As part of Britain, Northern Ireland took advantage of these services and benefits - for the first time, Catholics saw some things to help them. In 1963 Terence O'Neill a protestant became Unionist Prime minister of Northern Ireland. He tried to unite Protestants and Catholics. He also believed that the North and South could help each other. He promised reforms to help Catholics; Protestant thought O'Neill's reforms had gone too far, some extreme Protestant Unionists such as Ian Paisley formed an action group called the Ulster Volunteer Force to resist and changed in favour of the Catholics in Northern Ireland. Paisley believed that in a united Ireland Catholics would be able to outvote Protestants. Martin Luther King was respected by Catholics and was seen as an idyllic figure, his peaceful campaigning influenced many to set up the Northern Ireland Civil Rights Association, a movement that did not retaliate to Ireland's troubles violently. NICRA carried out most of their protests in marches, which began in August 1968. This peaceful approach to the situation in Ireland sparked the thought that it was a cover up for the IRA. The marches became violent; a march in Derry 1968 was aimed to walk through a protestant area, which caused brutal bloodshed and reminded the Catholics of the power in which the Protestants attained. 'The Battle of the Bogside' was produced when the Orangemen were greeted with violence, to the extent of which some were stoned. It was events like this that contributed to the deployment of the troops as shortly after, the troops were sent into Ireland to prevent these events from occurring. The welcoming of the foreign troops predictably caused many consequences including both short and long term. The short-term consequences had an immediate effect. ...read more.

soldiers who identified armed gunmen fired upon them in accordance with the standing orders in the Yellow Card. Each soldier was his own judge of whether he had identified a gunman... At one end of the scale, some soldiers showed a high degree of responsibility, at the other... firing bordered on the reckless." The British Government had decided that in March 1972, Mr Heath (the conservative Prime minister) decided that there was nothing left to do but end the Northern Irish Parliament. Northern Ireland was to be ruled directly from London. b****y Sunday was a turning point in Irish history, during the course of the event, it became more apparent to the public that the British were mistreating the Catholics. The event worked in the favour of the Catholics, but at the price of many innocent civilians. The Protestants had gained the link with the British parliament that they had always desired. The events of b****y Sunday are still remembered today, it was an unforgettable memory, and during the course of the event the true colours of the British were exploited to the nation via the media. A man from the Daily Telegraph stated" I was one of more than a 1000 people lying flat on their faces as the shooting continued. Pinned to the ground, it was impossible who fired the first shots." All three events had an impact to shape the peaceful Ireland we have today, the events contributed in their own way. All three events seemed to work in favour of the Catholics, during the course of the events, the Nationalists would arguably be the one's to start the violence; however the extreme response they received would never seem to justify their actions - which lead to the gain of the public's sympathy. I think b****y Sunday seemed to have the biggest impact during the conflict in Ireland, as it was a battle between the Catholic's and the British. The advanced technology enabled the dramatic increase in public sympathy to occur, the disgust towards the British troops lead to the banishment of the Northern Irish parliament. ?? ?? ?? ?? ...read more.