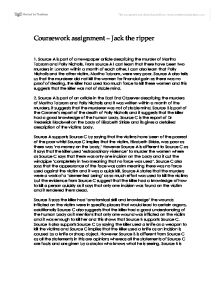 Coursework assignment - Jack the ripper 1. Source A is part of a newspaper article describing the murder of Martha Tabram and Polly Nicholls. From source A I can learn that there have been two murders in London within a month of each other, I can also learn that Polly Nicholls and the other victim, Martha Tabram, were very poor. Source A also tells us that the murderer did not kill the women for financial gain as there was no proof of stealing, the killer had used too much force to kill these women and this suggests that the killer was not of stable mind. 2. Source A is part of an article in the East End Observer describing the murders of Martha Tabram and Polly Nicholls and it was written within a month of the murders, it suggests that the murderer was not of stable mind. Source B is part of the Coroner's report of the death of Polly Nicholls and it suggests that the killer had a good knowledge of the human body. Source C is the report of Dr Frederick Blackwell on the body of Elizabeth Stride and its gives a detailed description of the victims body. Source A supports Source C by saying that the victims have been of the poorest of the poor whilst Source C implies that the victim, Elizabeth Stride, was poor as there was 'no money on the body.' However Source A is different to Source C as it says that the killer used 'extraordinary violence' to murder the women where as Source C ...read more.

Source G is part of a letter from the Home Secretary to the mile end vigilance committee on 17 September 1888. The Home Secretary states that offering a reward would mean people would make false accusations on innocent people just for the money. The police were asking permission to offer reward to anyone who gives information on the killer but they were declined. This would have been a good idea as they would get a list of suspects but the public would give information on anyone just to get the money and this would leave the police in a bigger state of confusion. The police also requested for 100 more men both uniformed and plain clothed so there can more of a chance to catch the killer. This was definitely a good idea as there were more men patrolling the area and there were more chances of spotting the killer. However this method proved to be insufficient as the killer was not seen the police, both uniformed and plain clothed. The metropolitan police sent a private and confidential letter to Col turner asking him to provide trained bloodhounds that could track the scent of the victim's blood in order to find the killer. This was a very good idea and it is still used today to track down suspects but this also failed to catch the notorious Whitechapel, murderer. Although this did prove that the killer murdered his victims rather stealthily as to not get any blood on himself. ...read more.

Also, the time at which she saw the man, it was dark and smog covered the whole of White chapel so therefore she could not have seen clearly and her evidence is most likely made up. These sort of eye-witness accounts lead the police to a dead end and their time is wasted. The chance of the police catching any criminal in those days would drastically drop if they didn't catch him in the act. The investigative tools the police had at the time did not include fingerprinting, forensic evidence and DNA. The police tried almost everything they could and they made requests that would help catch the killer (even though some of them were denied). The police was not used to the concept of killing without a motive and this confused the police as to what course of action they should take. Although the police did make some mistakes such as when the writing on the wall was erased before it could be photographed and they let Catherine Eddowes out of jail at 1.00 am when they clearly knew about the dangerous times. The police were not to blame for the ripper murders as they had never experienced anything like it and they did whatever they could to try and catch the killer. The public did not help the police in the investigation by giving false witnesses and accusations. The layout of White chapel was in such a way that it would be extremely easy for the ripper to escape. ?? ?? ?? ?? ...read more.