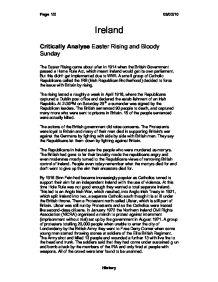 Ireland Critically Analyse Easter Rising and b****y Sunday The Easter Rising came about after in 1914 when the British Government passed a Home Rule Act, which meant Ireland would get its own parliament. But this didn't get implemented due to WWI. A small group of Catholic Republicans called the IRB (Irish Republican Brotherhood) decided to force the issue with Britain by rising. The rising lasted a roughly a week in April 1916, where the Republicans captured a Dublin post office and declared the establishment of an Irish Republic. At 2:30PM on Saturday 29th a surrender was signed by the Republican leaders. The British sentenced 90 people to death, and captured many more who were sent to prisons in Britain. ...read more.

At this time Hole Rule was not good enough they wanted a total separate Ireland. This led to an Anglo Irish War, which resulted, into Anglo Irish Treaty in 1921, which split Ireland into two, a separate Catholic south though it is still under the British throne. Then a Protestant north called Ulster, which is still part of Britain. Ulster was still run by Protestants and so the Catholics were treated like second-class citizens. In January 1972 the Northern Ireland Civil Rights Association (NICRA) organised a march to protest against internment (imprisonment without trial) set up by the government in August 1971. A group of protesters totalling 20,000 people when unable to enter the city of Londonderry by the British Army they went to Free Derry Corner when some young men started throwing stones at soldiers of the Elite British Regiment. ...read more.

They are also likely to think the IRA did start the shooting and that the British were only protecting themselves after the Catholic attack. The Protestants support the presence of British forces in Northern Ireland even today as they see them as protectors and law enforcers for the people of Northern Ireland against the IRA and Republican rebels. Even though these were the larger feelings of the events there are groups and people who think differently. Some Republicans think that they shouldn't have been throwing stones and should have been cautious and remained peaceful. A few Protestants think that the British army did go to far by killing 15 people after the Easter Rising. Both the Easter Rising and b****y Sunday are important events in Irish history in how they affect people prejudice feelings and events today. ?? ?? ?? ?? Page 1/2 03/02/10 History ...read more.