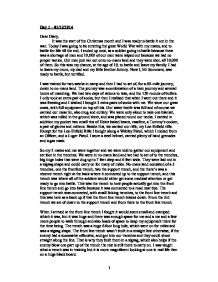 Dear Diary, It was the start of the Christmas month and I was ready to battle it out in the war.

Day 1 - 01/12/1914 Dear Diary, It was the start of the Christmas month and I was ready to battle it out in the war. Today I was going to be entering the great World War with my mates, and to battle for life till the end. I ended up now, as a soldier going to battle because there was a shortage of men and 10,000 of our men were wiped out because we had no proper tactics. Our men just ran out onto no-mans land and they were shot, all 10,000 of them. So this was my chance, at the age of 19, to battle and leave my family. I had to leave my mum, my dad and my little brother Johnny. Now I, Mr Sommers, was ready to battle, but terrified. I was trained for two weeks in camp and then I had to set of, for a 60-mile journey, down to no-mans land. The journey was a combination of a train journey and several hours of marching. We had two days of rations to take, and the 150 rounds of bullets. I only took an extra pair of socks, but then I realised that when I went out there and it was freezing and I wished I bought 3 extra pairs of socks with me. We wore our great coats, with full equipment on top of this. Our water bottle was full and of course we carried our mess tin, also mug and cutlery. We were only aloud to take one blanket, which was rolled in the ground sheet, and was placed round our necks. I carried in addition my pocket two small tins of Heinz baked beans, vaseline, a Tommy's cooker, a pair of gloves and mittens. Beside this, we carried our rifle, my Lee-Enfield rifle. Except for the Lee-Enfield Rifle I bought along a Webley Pistol, which I nicked from an Officer, and a Luger Pistol. ...read more.

They were very friendly and so we asked them "what is daily life like for you, here at the trenches". And so they told us and said that daily life was getting up at 5.00 in the morning from our bunkers. We would have a 1-minute shower and so everybody could get around with the murky water. If the shower was broken then you couldn't have one. Usually you would have a shower every week not everyday because of the little amount of water which some of us had to carry in a bucket from a near by river. We would eat breakfast straight after being dressed at around 6.00. At dusk and dawn everybody had a routine shaped by 'stand to', where everybody would have to stand on the fire-step and get ordered what they are going to do this day. In the morning it would roughly last for an hour and we would have to clean all of the equipment up sort the trenches out clean all the guns, also repair any broken parts of the trench and maybe draining out the trench caused by the rain and to reinforce the walls of the trench also caused by the rainfall. Some of the jobs troops had to do were scary like adding extra barbed-wire and people found that job a lot worse then getting shell shock. After that was done the other half of the stand-to we had to aim our guns to the enemy and see if there is something going on or just fire at them if they fire to us first. Then we would start the fighting, depending if there was any or if we had a battle, and this could go on for a long time. The trenches were very filthy and so dangerous. It is an unhealthy place and all soldiers' cloths were covered in mud, blotches of blood and lice. ...read more.

These are the tactics, which I learnt in the camp and which could be useful to me one day: Patrolling- Patrols was where a group of soldiers would go out on No-mans land at night and would spy on the enemy's base and try to discover and collect information of the enemy and bring it back. Men had to take turns every time and it was a dangerous job. The team would cautiously inch their way forward on their stomachs and try to get close enough to the enemy trenches for them to hear things. Everybody who was going on a patrol had to blacken their faces with grease paint or burnt cork. We have to carry cut down rifles, sheath knives and grenades. Also to capture German soldiers for interrogation was an objective of patrols. I haven't been on a patrol yet but may do one day. Tunnelling- This was a new tactic, which now I know about. This tactic was when we would employ diggers to mine out a tunnel to get from one base to the enemy base. The main objective was to place mines beneath enemy defensive positions and when it was detonated, the explosion would destroy the section of the trench where the mines were placed. When the part of the trench was blown up troops can come out and shoot around and try to kill their enemy. There are ways to listen and figure out if there are people tunnelling to their base. Preliminary Bombardment- This a tactic used in the battle of Ypres (Battle of Passchendaele). Before an infantry advance during battle, it was a good idea to bombard the enemy defences with all heavy artillery, which was available. The whole idea was that this preliminary bombardment should either kill the defending soldiers or would at least force the enemy to retreat, but I the battle Ypres it was a failure because the enemy defenders were able to return to their trench by the time the infantry advance took place. This is all of my tactics and weapons I know. 1 ...read more.