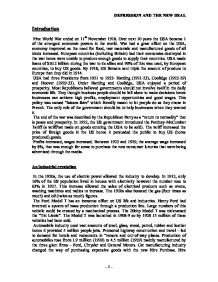 Depression and The New Deal

Introduction First World War ended on 11th November 1918. Over next 10 years the USA became 1 of the strongest economic powers in the world. War had a great effect on the USA, economy improved as the need for food, raw materials and manufactured goods of all kinds increased. European countries (including Britain) had their economies destroyed in the war hence were unable to produce enough goods to supply their countries. USA made loans of $10.2 billion during the war to its allies and 90% of this was used, by European countries, to buy US goods. By 1918, US farmers sent triple the amount of produce to Europe than they did in 1914. USA had three Presidents from 1921 to 1933- Harding (1921-23), Coolidge (1923-29) and Hoover (1929-33). Under Harding and Coolidge, USA enjoyed a period of prosperity. Most Republicans believed governments should not involve itself in the daily economic life. They thought business people should be left alone to make decisions hence businesses can achieve high profits, employment opportunities and good wages. This policy was named "laissez-faire" which literally meant to let people do as they chose in French. The only role of the government should be to help businesses when they wanted it. The end of the war was described by the Republican Party as a "return to normality" that is peace and prosperity. In 1922, the US government introduced the Fordney-McCumber Tariff (a tariff/tax made on goods entering the USA to be sold). The tariff increased the price of foreign goods in the US hence it persuaded the public to buy US (home produced) goods. Profits increased, wages increased. Between 1923 and 1929, the average wage increased by 8%, that was enough for some to purchase the new consumer luxuries that were being advertised through the media. An industrial revolution In the 1920s, the use of electric power allowed the industry to develop. ...read more.

He was a President who claimed the USA would soon "be in sight of the day when poverty will be banished from this nation". Hoover believed government interference would "stifle initiative and invention". After the Crash, angry US citizens who became homeless sarcastically named their shacks "Hoovervilles" and wrapped themselves in "Hoover blankets" (newspapers) to keep warm. Hoover did not cause the Crash and there was little he could do to lessen its impact. Government attempts at recovery, 1929-33 Hoover was forced to take action. By reducing taxes on the wealthy, he gained extra money to aid farmers through the Agricultural Marketing Act but this was not enough. Farmers needed help paying their mortgages hence despite the aid, they could not pay off their loans; bankruptcies endured. Unemployment was increasing every month, charity funds were insufficient. For instance, Toledo (Ohio) could only afford 2 cents per relief meal per day. New York only gave $2.39 per week to each family on relief. Hoover set up the Reconstruction Finance Corporation (RFC) which distributed $300 million to US state governments for unemployment relief. Extra assistance was provided when the Federal Home Loan Bank Act was passed in July 1932. This was formed to encourage home construction, increase employment and encourage home ownership. The Act set up twelve regional banks with a fund of $125 million to help fund discounted home loans. Resentment among the people Wages fell and unemployment rose, so people were offended in the Depression. Hoover became more in 1932 when he ordered the US army to split up the Bonus Marchers (veterans of WW1). The Bonus Marchers marched to Washington DC to ask for the economic bonus, which was due to them in 1945, but they wanted pay early because they suffered the Depression. These veterans were accompanied by other unemployed people (approx. 12,000 to 40,000). They even built a "Hooverville" at the edge of the capital. ...read more.

In April 1938, Roosevelt, asked Congress to approve a $3.8 billion budget to help finance relief and recovery. The aim of President Roosevelt had been to restore the US economy. The theory was that jobs would be created; there would be greater confidence in business and industry so more investment would result. The New Deal restored the US broken economy. The TVA was proved to be successful and the New Deal bought relief, employment and hope back to Americans. Most Americans were better off by the end of 1938 than they had been in 1932. In addition the New Deal strengthened US democracy. The faith was restored in each citizen by Roosevelt. The New Deal was not completely successful. As tension increased in Asia and Europe, Roosevelt concentrated on international issues so the New Deal came to a halt. The Second World War helped the USA to emerge from the Depression but there were still 6 million unemployed citizens in 1941. One view of the New Deal is that Roosevelt did not restore the US economy and that the Second World War allowed recovery. This time the jobs were permanent and with the expansion of the armed forces and munitions, many people could return to work. Another view of the New Deal is that not only was it relatively successful in the 1930s in creating jobs; it gave hope and created a spirit of optimism in a time of crisis. It is viewed as a period when people of the USA might have resorted to fascism but were saved. Roosevelt was accused of resorting to fascism. A popular joke of the 1930s linking two cows to political philosophy Socialism: You own two cows you give one to your neighbour. Communism: You give both cows to the government and the government gives you back the milk. Fascism: You keep the cows but give the milk to the government who sells it back to you. New Dealism: You shoot both cows and milk the government. ?? ?? ?? ?? DEPRESSION AND THE NEW DEAL - 1 - ...read more.