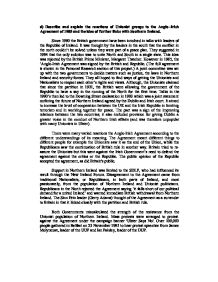 Describe and explain the reactions of Unionist groups to the Anglo-Irish Agreement of 1985 and the idea of further links with Southern Ireland.

d) Describe and explain the reactions of Unionist groups to the Anglo-Irish Agreement of 1985 and the idea of further links with Southern Ireland. Since 1980 the British government have been involved in talks with leaders of the Republic of Ireland. It was thought by the leaders in the south that the conflict in the north couldn't be solved unless they were part of a peace plan. They suggested in 1984 that the only solution was to unite North and South in a single state. This idea was rejected by the British Prime Minister, Margaret Thatcher. However in 1985, the 'Anglo-Irish Agreement was signed by the British and Republic. ...read more.

Talks in the 1990's then led to the Downing Street declaration in 1993 which was a joint statement outlining the future of Northern Ireland agreed by the Dublin and Irish court. It aimed to increase the level of cooperation between the UK and the Irish Republic in limiting terrorism and in working together for peace. The pact was a sign of the improving relations between the two countries; it also included provision for giving Dublin a greater voice in the conduct of Northern Irish affairs (and was therefore unpopular with many Unionists in Ulster). There were many varied reactions the Anglo-Irish Agreement according to the different understandings of its meaning. ...read more.

Disagreement to the Agreement came from traditional Nationalists, or Republicans, in both parts of Ireland, and most passionately, from the population of Northern Ireland and Unionist politicians. Republicans in the North rejected the Agreement saying 'it falls short of our political demand for a united Ireland' and wanted immediate British withdrawal from Northern Ireland. The Sinn F�in leader (Gerry Adams) thought of the Agreement as a surrender to Britain in that it linked closely with the partition and British rule. Both Governments miscalculated the strength of the resistance from the Unionist population of Northern Ireland. Mass protests were arranged to protest against the Agreement under the campaign banner 'Ulster Says No'. Over 100,000 people gathered in Belfast on 23 November 1985 to hear protest speeches from James Molyneuax, leader of the UUP and Ian Paisley, leader of the DUP. ...read more.