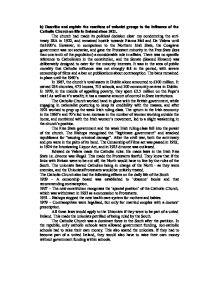 Describe and explain the reactions of unionist groups to the influence of the Catholic Church on life in Ireland since 1921.

b) Describe and explain the reactions of unionist groups to the influence of the Catholic Church on life in Ireland since 1921. The church had made its political decision clear my condemning the anti-treaty IRA in 1922, and remained hostile towards Fianna F�il and De Valera until the1930's. However, in comparison to the Northern Irish State, the Cosgrave government was not sectarian, and gave the Protestant minority in the Free State (less than one-tenth of the population) a considerable role in affairs. There was no specific reference to Catholicism in the constitution, and the Senate (Seaned Eireann) was deliberately designed to cater for the minority interests. It was in the area of public morality that Catholic influence was not strongly felt in the period, with severe censorship of films and a ban on publications about contraception. ...read more.

The upturn in the Irish economy in the 1960's and 70's led to an increase in the number of women working outside the home, and combined with the Irish women's movement, led to a slight weakening in the church's position. The Free State government and the weak Irish ruling class fell into the power of the church. The Bishops recognised the "legitimate government" and attacked republicans for "causing criminal damage". After the civil war, both the anti-treaty and pro were in the palm of its hand. The Censorship of Films act was passed in 1923, in 1924 the Intoxicating Liquor Act, and in 1925 divorce was outlawed. Edward de Valera made the Catholic rules. He made laws in the Irish Free State i.e. ...read more.

1937 - The new constitution recognises the 'special position' of the Catholic Church, which was withdrawn in 1932 as a concession to Protestants. 1951 - Bishops stopped the new health care system for mothers and babies. 1979 - Contraceptives were legalised, but only for married couples with a doctors' prescription. All these laws would apply to the Unionists if they were to be part of a united Ireland. This made the unionists petrified of being ruled by the South. The Catholic Church was a dominant force in the South after the partition. In the republic, only catholic schools were allowed government funding, non-catholic schools had to raise their own money. This also scared the unionists. If they had to become part of a united Ireland, they would also have to raise their own money without government funding within schools. ...read more.