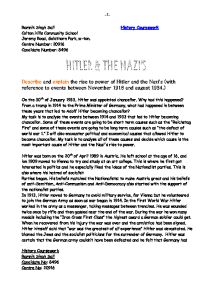 Describe and explain the rise to power of Hitler and the Nazi's (with reference to events between November 1918 and august 1934).

Ramnik Singh Sall History Coursework Colton Hills Community School Jeremy Road, Goldthorn Park, w-ton. Centre Number: 20916 Candidate Number: 8496 Describe and explain the rise to power of Hitler and the Nazi's (with reference to events between November 1918 and august 1934.) On the 30th of January 1933, Hitler was appointed chancellor. Why had this happened? From a tramp in 1914 to the Prime Minister of Germany, what had happened in between these years that led to Adolf Hitler becoming chancellor? My task is to analyse the events between 1914 and 1933 that led to Hitler becoming chancellor. Some of these events are going to be short term causes such as the "Reichstag Fire" and some of these events are going to be long term causes such as "the defeat of world war 1." I will also encounter political and economical causes that allowed Hitler to become chancellor. My task is to analyse all of these causes and decide which cause is the most important cause of Hitler and the Nazi's rise to power. Hitler was born on the 20th of April 1989 in Austria. He left school at the age of 16, and ion 1909 moved to Vienna to try and study at an art college. This is where he first got interested in politics and he especially liked the ideas of the Nationalist parties. This is also where his hatred of socialist Parties began. His beliefs matched the Nationalists; to make Austria great and his beliefs of anti-Semitism, Anti-Communism and Anti-Democracy also started with the support of the nationalist parties. In 1913, Hitler moved to Germany to avoid military service, for Vienna but he volunteered to join the German Army as soon as war began in 1914. In the First World War Hitler worked in the army as a messenger, taking messages between trenches. He was wounded twice once by rifle and then gassed near the end of the war. ...read more.

The weakness of the Weimar is an important cause in Hitler's rise to power because had the Weimar been a strong government from the start and not faced as many problems then the chances are that extremist groups would cease to exist as no-one would support them. This notion that no-one likes to listen to extremist parties when things are going right can be proved. This was true for the Nazi's; the Nazi's and Hitler were unable to make an impact between 1924 and 1929. This was due to the fact that the Weimar republic was doing quite well at the time. The republic was under the leadership of Gustav Stresemann, who was very influential. Under Stresemann Germany did quite well, the economy recovered quickly from the collapse of the mark and inflation and the Rentenmark was introduced to replace the old devalued currency. Germany was also greatly helped by the Dawes plan of 1924; this was a bank loan from America. By this plan the allies agreed for Germany to pay off it's reparations in easier stages. Stresemann also signed the Young Plan; this plan went further from the Dawes plan and extended the payments by another 59 years. Although Germany seemed to be doing well Stresemann knew what could happen; "The economic position is only a flourishing on surface. Germany in fact is dancing on a volcano" Gustav Stresemann Weimar Germany- Josh Brooman What Stresemann meant from this was that Germany was only the support of America. If the American banks recall their loans, the Dawes and the Young Plan's. Then Germany would greatly suffer, the economy would collapse again and the Weimar would again be distrusted. This was what Hitler needed. During the "Stresemann era" Hitler couldn't make an impact no matter how hard he tried. In 1925 he completely re-organised the party. He divided the party in to local units called "Gaue" and each under a "Gauleiter" appointed by Hitler himself. ...read more.

or personal body-guards. In the knight of the long knives Hitler has all the leader of the SA murdered and wins the army's support and therefore consolidating his power. Hitler betrayed his SA who had helped him all along to get to where he was now. So the knight of the long knives is also another important cause for Hitler's rise to power, b4ecause had it not taken place Hitler wouldn't have been able to win the army's support and consolidate his power. On the 2nd August, President Hindenburg dies and Hitler announces that there would be no presidential election. He united the president and chancellor and took responsibility for both and became the Fuhrer of Germany, one strong leader. Army leaders were grateful to Hitler for saving them from Rohm and the SA and Hitler make the army swear an oath of personal allegiance to him. "I swear to god this holy oath that I shall offer total obedience to the fuhrer of the German Reich and people, Adolf Hitler, the supreme commander of the Army, and that I shall be prepared, as a brave soldier, to lay down my life at any time." In this essay, I have discussed all the long-term and short-term causes for Hitler's rise to power. All of the causes that I have discussed in this essay are very important for the rise of Hitler and the Nazi's, causes like the great depression are very important because without them Hitler would never been able to come to power. However there was a combination of causes that led to Hitler's rise to power and most of these were manipulated by other causes. The causes are interlinked and deeply rooted. But I think that the most important cause for Hitler's rise to power was the Enabling Act. This is because this act gave Hitler real power and the power to use democracy to destroy itself. -1- History Coursework Ramnik Singh Sall Candidate No: 8496 Centre No: 20916 ...read more.