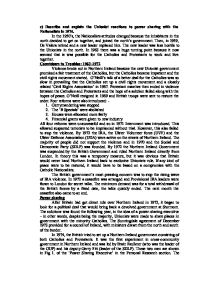 Describe and explain the Unionist reactions to power sharing with the Nationalists in 1974.

c) Describe and explain the Unionist reactions to power sharing with the Nationalists in 1974. In the 1950's, the Nationalists attitudes changed because the inhabitants in the north decided to get on together, and joined the north's government. Then, in 1959, De Valera retired and a new leader replaced him. The new leader was less hostile to the Unionists in the north. In 1963 there was a huge turning point because it now seemed that is was possible for the Catholics and Protestants to work and live together. Countdown to Troubles: 1963-1972 Violence broke out in Northern Ireland because the new Unionist government promised a fair treatment of the Catholics, but the Catholics became impatient and the civil rights movement started. O'Neill's talk of a better deal for the Catholics was so slow in prevailing that the Catholics set up a civil rights movement and a closely related 'Civil Rights Association' in 1967. Protestant marches then ended in violence between the Catholics and Protestants and the hope of a solution failed along with the hopes of peace. ...read more.

The British government's most pressing concern was to stop the rising wave of IRA violence. In 1972 a ceasefire was arranged and Provisional IRA leaders were flown to London for secret talks. The minimum demand was for a total withdrawal of the British forces by a fixed date, the talks quickly ended. The next month the ceasefire also came to an end. Power sharing After Britain had got direct rule over Northern Ireland in 1972, it began to look for a political deal that would bring back a devolved government at Stormont. The solutions was found the following year, in the idea of a power-sharing executive - in other words, despite being the majority, Unionists were made to share places in government with the minority Catholics. The Sunningdale agreement of December 1973 provided for a council of Ireland, with ministers drawn from the north and south of the border. In 1974, the British tried to set up a Northern Ireland government consisting of both Catholics and Protestants. ...read more.

He immediately formed a new party but it was a disaster and he now only represented a minority in the majority Unionist community. Three parties opposed to power-sharing (UUP, DUP and Vanguard) set up an opposition organisation, the United Ulster Unionist Council, to channel their efforts into the wreckage of the Agreement. The Executive also dealt with more trouble when a Westminster election was called on 7 February. The UUUC won 11 of the 12 Westminster seats and Faulkner's newly formed party failed to have any of its candidates elected. The remaining seat in Westminster went to Gerry Fitt, the only pro-Sunningdale candidate. He was the SDLP leader and deputy Chief Executive of the power-sharing administration. The UUC threatened industrial disruption if the new Labour government did not do away with the Executive. On May 14 and industrial strike was held and 14 days later had forced the Executive to resign. These strikes show the drastic action these people took in order to save themselves from a power-sharing government. The Unionists were very against the Executive. ...read more.