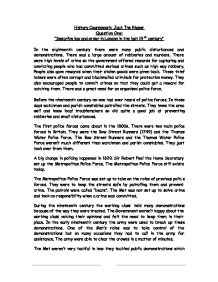 Describe law and order in London in the last 19th century

History Coursework: Jack The Ripper Question One: "Describe law and order in London in the last 19th century" In the eighteenth century there were many public disturbances and demonstrations. There was a large amount of robberies and murders. There were high levels of crime so the government offered rewards for capturing and convicting people who had committed serious crimes such as high way robbery. People also gave rewards when their stolen goods were given back. These thief takers were often corrupt and blackmailed criminals for protection money. They also encouraged people to commit crimes so that they could get a reward for catching them. There was a great need for an organised police force. Before the nineteenth century no-one had ever heard of police forces. In those days watchmen and parish constables patrolled the streets. They knew the area well and knew local troublemakers so did quite a good job at preventing robberies and small disturbances. The first police forces came about in the 1800s. There were two main police forces in Britain. They were the Bow Street Runners (1749) and the Thames Water Police Force. The Bow Street Runners and the Thames Water Police Force weren't much different than watchmen and parish constables. They just took over from them. A big change in policing happened in 1829. Sir Robert Peel the Home Secretary set up the Metropolitan Police Force. The Metropolitan Police Force still exists today. The Metropolitan Police Force was set up to take on the roles of previous police forces. They were to keep the streets safe by patrolling them and prevent crime. The patrols were called "beats". The Met was not set up to solve crime and took no responsibility when a crime was committed. During the nineteenth century the working class held many demonstrations because of the way they were treated. The Government weren't happy about the working class voicing their opinions and felt the need to keep them in their place. ...read more.

People often got robbed and often got killed in the process. Despite the terrible conditions of Whitechapel people from outside the East End were attracted to the area. Many middle class men and women came to Whitechapel from the West End in search of prostitution, alcohol and for gambling. They often gave accounts of what the area was like. One person said that Whitechapel was "evil collection of slums that hide human creeping things; where filthy men and women live on gin, where collars and clean shirts and unknown; where every citizen wears a black eye". Another person described how they had seen a father, mother, three children and four pigs living in one cellar. All these descriptions were very gruesome but they may have been exaggerated. One of the reasons why the Ripper murders are so famous is the choice of victims. The Ripper killed randomly but he never killed men and only killed women who were all prostitutes. The five official victims of Jack the Ripper were Polly Nicholls, Annie Chapman, Elizabeth Stride, Catherine Eddowes and Mary Kelly. All the women murdered by the Ripper were innocent people who were of no problem to anyone. Some of the victims were married and had kids. There was no motive for killing these prostitutes. All the Ripper murders that took place were fairly close to each other. All the murders happened in Whitechapel with the exception of one in Spitalfields. This caused public alarm because it was obvious that there was a killer on the loose in Whitechapel. People were scared to go out at night and more police officers were put on the streets. The way the Ripper killed his victims was bloody and gruesome. The murders are the most horrifying murders even known. The first victim of Jack the Ripper was Polly Nicholls. She had her throat slashed ear to ear; she had been stabbed thirty-nine times on the body, neck, private parts and abdomen. ...read more.

He was cleared from the case and lots of police time was wasted. The police took a lot of time wondering whether the killer was local or not. Whitechapel was a very poverty driven area but many working men from the outside came to Whitechapel to rest in Pubs. Could the Ripper be someone from outside? The police could not decide. After the murders many witnesses came forward. A very interesting and detailed description was given after the murder of Mary Kelly from George Hutchinson. He described a man talking to Mary Kelly the night she was murdered. Here is the description he gave: "age about thirty-our or thirty-five, height five feet six inches, dark eyes and dark eye lashes, slight moustache curled up at the end, hair dark; dress, long dark coat, collar and cuffs trimmed astrakhan and a dark jacket underneath light waistcoat, dark trousers, dark hat, button boots and gaiters, with white buttons, black tie with horseshoe pin, respectable appearance, Jewish appearance". The streets of Whitechapel were very narrow and dark in the eighteenth century. How could someone give such a detailed description? Was the man covering up something? Did he know the Ripper? He needed to be questioned by the police. However the police noted down his description and did nothing more about it. The police started to show signs up panic when they couldn't catch the Ripper. They distributed eighty thousand hand bills and allowed the publication of the Dear Boss letter. This led to lots of people giving information which was mostly false but the police had to investigate. Lots of police time was wasted again. When some one gets murdered they are normally murdered by someone who knows them or are murdered because the killer wants something from them. However the Ripper murders were random and the only connection between the victims was that they were prostitutes. The Ripper appeared to have no motive and there no evidence that anything was stolen from the victims. This made it all the harder for police to catch the killer. ?? ?? ?? ?? ...read more.