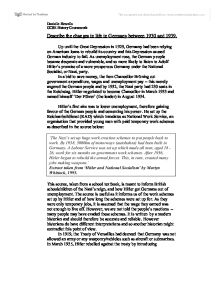 Describe the changes in life in Germany between 1930 and 1939

Describe the changes in life in Germany between 1930 and 1939. Up until the Great Depression in 1929, Germany had been relying on American loans to rebuild its country and this Depression caused German industry to fail. As unemployment rose, the German people became desperate and vulnerable, and so more likely to listen to Adolf Hitler's promise of a more prosperous Germany under the National Socialist, or Nazi, party. In a bid to save money, the then Chancellor Br�ning cut government expenditure, wages and unemployment pay - this merely angered the German people and by 1932, the Nazi party had 230 seats in the Reichstag. Hitler negotiated to become Chancellor in March 1933 and named himself 'Der F�hrer' (the leader) in August 1934. Hitler's first aim was to lower unemployment, therefore gaining favour of the German people and cementing his power. He set up the Reichsarbeitdienst (RAD) which translates as National Work Service, an organisation that provided young men with paid temporary work schemes as described in the source below: This source, taken from a school textbook, is meant to inform British schoolchildren of the Nazi's reign, and how Hitler got Germans out of unemployment. ...read more.

It is quire clearly a staged photo as all of the boys look keen. The picture does not show us the negatives of the Hitler Youth. Also, we do not know how the boys, and their parents, felt towards the Hitler Youth - many may have disliked it but would have been unable to speak out. Girls were brought up, from a young age, to believe that their only purpose was motherhood. Employers were encouraged to give men jobs, and women were pushed back into the home to bring up children. A family was considered a home with more than four children. Birth control, contraception and abortion were frowned upon. Those with large families were rewarded with medals, loans and allowances. Women were also encouraged to marry, whilst slimming was discouraged - women had to have a good childbearing figure. Maternity homes were set up (in reality, they were brothels), so that unmarried women could get pregnant by "racially pure" SS men. One woman describes her view below: This autobiography is a primary source, written by a woman who lived in Germany through the Nazi regime. It is more of a factual account than an emotional account, but it still includes detailed information. ...read more.

During the Thirties, Germany experienced a great many changes in every aspect of the country. Before Nazi rule, Germany was in deep unemployment and the peoples' faith in the government was low - there is no denying that the Nazi Party turned this around. They gained improved social conditions such as good motorway systems and cars (the Volkswagen, for example) and their financial position had improved greatly. Although Nazis forced people to work hard, they encouraged people by providing them with rewards. The Treaty of Versailles had made Germans feel humiliated, but the Nazis brought back their self-esteem. However, Jewish people, gypsies, disabled people, homosexuals and other such minority groups felt the changes more harshly than others, as they were persecuted under the Nazi regime. Hitler forced people to so his will and punished those who didn't by using his Gestapo. Many people disagreed, but were forced to keep quiet. By the end of the Thirties Germany was a self-sustainable country (it produced its own food and weapons in order to support itself during the war - "Ein Volk, Ein Reich, Ein F�hrer."). Hitler made sure, though propaganda, that German people believed that war was the right move, and so, in 1939, Hitler sent a prosperous German army into Poland, signalling the beginning of World War II. Danielle Howells GCSE History Coursework ...read more.