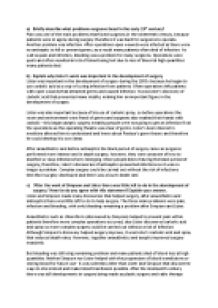 Describe the Developments in Surgery in the 1800s

Transfer-Encoding: chunked ﻿1. Briefly describe what problems surgeons faced in the early 19th century? Pain was one of the main problems that faced surgeons in the nineteenth century, because patients were in agony during surgery therefore it was hard for surgeons to operate. Another problem was infection. After operations open wounds were infected as there were no antiseptic to kill or prevent germs, as a result many patients often died of infection. As well as pain and infection, bleeding was a problem for many surgeons. Operations were quick and often resulted in lots of blood being lost due to loss of blood at high quantities many patients died. ...read more.

Lister?s keen interest in medicine allowed him to understand and know about Pasteur?s germ theory and therefore he could develop his own ideas. After anaesthetics and before antiseptics the black period of surgery came as surgeons performed more intense and in depth surgery; however, they were unaware of how to disinfect or stop infections form emerging. More people died of during the black period of surgery; therefore, Lister?s discoveries of antiseptics prevented infections so it was no longer a problem. Complex surgery could be carried out without the risk of infections therefore surgery developed and there was a lower death rate. 1. ?After the work of Simpson and Lister there was little left to do in the development of surgery.? How far do you agree with this statement? ...read more.

Neither Simpson nor Lister helped with the progression of blood transfusions or storing blood for future use - it was scientists other than Lister and Simpson that discovered ways to store blood and make blood transfusion possible. After the nineteenth century there was still developments in surgery being made as plastic surgery and radio therapy further enhanced the effects of surgery and made improvements even after pain, infection and bleeding were no longer the main problems. Although Simpson and Lister made major improvements in the development of surgery, there was still other major problems that were unsolved after Simpson and Lister, therefore the statement above is not completely true as developments were made and are still being made to make surgery more efficient and effective. ...read more.