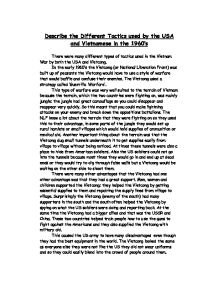 Describe the Different Tactics used by the USA and Vietnamese in the 1960&amp;#146;s

Describe the Different Tactics used by the USA and Vietnamese in the 1960's There were many different types of tactics used in the Vietnam War by both the USA and Vietcong. In the early 1960's the Vietcong (or National Liberation Front) was built up of peasants the Vietcong would have to use a style of warfare that would baffle and confuse their enemies. The Vietcong used a strategy called 'Guerrilla Warfare'. This type of warfare was very well suited to the terrain of Vietnam because the terrain, which the two countries were fighting on, was mainly jungle; the jungle had great camouflage so you could disappear and reappear very quickly. So this meant that you could make lightning attacks on your enemy and break down the oppositions battalions. The NLF knew a lot about the terrain that they were fighting on so they used this to their advantage, in some parts of the jungle they would set up rural hamlets or small villages which would hold supplies of ammunition or medical aid. Another important thing about the terrain was that the Vietcong dug small tunnels underneath it to get supplies easily from village to village without being noticed. At times these tunnels were also a place to hide from American soldiers. Also the US soldiers could not go into the tunnels because most times they would go in and end up at dead ends or they would try to dig through false walls but a Vietcong would be waiting on the other side to shoot them. ...read more.

The most deadly weapon that the Vietcong had in their arsenal was the mine. There were two types of mine the fragment mine and 'Bouncing Betty' antipersonnel mine with two charges: the first propels the explosive charge upward, and the other is set to explode at about waist level. These type of weapons and Guerrilla tactics caused the American army to always be worrying what attack was going to come next so they had to use many different types of tactics to counter the Vietcong attacks. In 1962 the USA's first tactic was to set up 'Strategic Hamlets'. These hamlets were set up to protect South Vietnamese peasants from the Vietcong. However this tactic didn't quite work because South Vietnamese people told the Vietcong where these hamlets were and they were soon overrun by the Vietcong, this got them extra supplies in munitions. The next tactic the USA tried was called 'Winning the Hearts and Minds'. This tactic was aimed at the peasant's of South Vietnam this was an operation to show the people that the US were the good guys. To prove this they gave the people free medical care and helping them improve crop growth by giving them free advice. These two tactics did not quite work the way the US intended to so, so they started using different types of tactics. ...read more.

When asked what they would live on until new crops could be raised, the Vietnamese camp commander said, 'Maybe they can fish'. The following Vietcong tactics countered these tactics. February 7th 1965 a U.S. helicopter base and advisory compound in the central highlands of South Vietnam was attacked by NLF commandos. Nine Americans were killed and more than 70 were wounded. They did this because they knew if they took out the air bases the Americans would find it hard to get men in and out and they would not be able to launch aerial attacks on the Vietcong. Two years later in 1967 the Vietcong started to concentrate on taking over the small towns but their next main attack was the TET offensive in 1968. On 31 January 1968 combat erupted throughout the entire country in the TET (New Year) Offensive. Thirty-six of 44 provincial capitals and 64 of 242 district towns were attacked. The Vietcong even struck at the American embassy in the capital, Saigon. Once the shock and confusion wore off, most attacks were crushed within a few days. During those few days, however, the fighting was some of the most violent ever seen in South Vietnam. Fifty thousand Communist soldiers were killed during the TET offensive. Fourteen thousand South Vietnamese soldiers were killed. And two thousand American soldiers were killed. Thousands of Vietnamese civilians were killed, too. However the Vietcong still managed to prevail and win the war. ...read more.