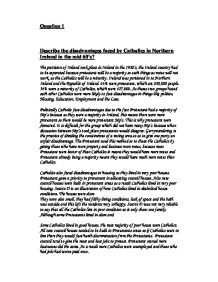 Question 1 Describe the disadvantages faced by Catholics in Northern Ireland in the mid 60's? The partition of Ireland took place in Ireland in the 1920's, the Ireland country had to be separated because protestant will be a majority so such things as votes will not work, as the Catholics will be a minority. Ireland was portioned in to Northern Ireland and the Republic of Ireland. 66% were protestant, which are 820,000 people. 34% were a minority of Catholics, which were 427,000. As theses two groups hated each other Catholics were more likely to fact disadvantages in things like politics, Housing, Education, Employment and the Law. Politically Catholic face disadvantages due to the fact Protestant had a majority of Mp's because as they were a majority in Ireland, this meant there were more protestant so there would be more protestant Mp's. This is why protestant were favoured. It is difficult for the group which did not have many Mp's because when discussion between Mp's took place protestants would disagree. ...read more.

Catholics were in separate schools, this helped to ensure that they could be identify and discriminated against in term of jobs and other opportunities Police force were mainly protestant. There was resentment between Catholics and the police especially 'B' Specials. Overall, Catholics faced many disadvantages that were mainly due to protestant discrimination. Protestant were able to do this because they were a majority and Catholics were a minority. Political domination and the feeling in stormont that enemies allowed and encouraged this, source F Show how different disadvantage link up and help each other to happen. Most employers in Northern Ireland were Protestant so they tended to employ mainly Protestants. Source A shows us that out of 10,000 workers in a Belfast Shipyard only 400 were Catholics and it also shows that were Catholics were the majority Catholics got most of the jobs, out of 75 school bus drivers in Fermanagh only 7 were Protestants, the population of Fermanagh was more than half Catholic. ...read more.

Question 1 Source B is a very good example of this, it is a Linfield scout telling us that if a boy is good at sports and is a Catholic he will suddenly not be good enough as Protestants were thought to be better than Catholics. Catholics and Protestants also went to different schools and were only taught about their own religion and faith and were brought up to think the other religious group was an enemy to them and this led to the ongoing violence in Northern Ireland. The information gained clearly illustrates that Catholics faced many disadvantages in Northern Ireland and were treated unfairly by the protestant. A vast majority of Catholics faced these problems but there were a minority who good paid jobs, good housing, no problems with the RUC. The Catholics who faced the largest disadvantages lived in the run down working class areas if Northern Ireland for example Londonderry. A vast majority of Catholics faced these problems due to Ian Paisley and many other politicians views that Catholics churches are working to enslave protestant although other protestant have different views, some say Catholics were lazy and other even denied the such disadvantage existed. ...read more.