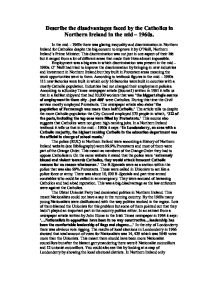 Describe the disadvantages faced by the Catholics in Northern Ireland in the mid - 1960s.

The police (RUC) in Northern Ireland were according a History of Northern Ireland website (see Bibliography) were 99.9% Protestants and most of them were part of the Orange Order. This meant as members of the Orange Order they had to oppose Catholicism. On the same website it stated that the police were 'extremely biased and violent towards Catholics, they would attack innocent Catholic reasons for no reason whatsoever.' The B-Specials were as a section within the police that was also 99% Protestants. These were called in Unionists to act like a police force or army. There was about 10, 000 B-Specials and part time armed constables who could be called in an emergency. They were accused of harassing Catholics and had a bad reputation. ...read more.

The results of local elections in Londonderry in 1966 showed that total amount of votes for Nationalists was 14, 429 which was 5648 votes more than the Unionists. This meant there should have been more Nationalist councillors but after the blatant gerrymandering there were 8 Nationalist councillors and 12 unionist councillors. You could also see this by looking at a map of Londonderry by showing the local electoral districts. In Northern Ireland only ratepayers could vote and this was a disadvantage to the poorer Catholics who did not own property and were therefore discriminated. Education was a little bit better in the 1960s as Catholics could go to universities, but they could not get jobs. In the mid-1960s housing conditions were very bad for most Catholics. In a photograph of the house a Catholics family taken Londonderry in the 1960s it shows very bad living conditions and maybe suggests that living conditions were behind its time. ...read more.