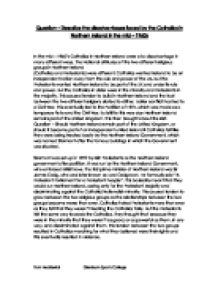 Describe the disadvantages that faced Catholics in Northern Ireland during the mid-1960s.

Whereas Catholic schools had to find fifty percent of ALL of their costs, so they tended to study cheaper subjects such as the arts i.e. Drama, Music, Art. With the Catholic schools not being able to afford the resources for science, they didn't always get a good science qualification, and most of the best paid jobs required a science qualification. Catholics were discriminated in employment as a result of their education and not getting good grades in expensive subjects such as Science. This is because most of the best paid jobs needed a Science Qualification. This meant that they were discriminated in quite a lot of jobs, which included a lot of power. For example 35 - 40% of the whole of Northern Ireland was a Roman Catholic people, but only 14.5% of the officers in the Northern Ireland Police Force were Roman Catholics. This is because of their education background not being good enough. Protestants also held most of the Civil Service and Local and National Government jobs. 97.5% of ALL council employees where Protestant. N.I.C.R.A (Northern Ireland Civil Rights Association) ...read more.

Even though there were less Protestants living in Londonderry, the Protestants got twelve Protestant councillors elected, compared to only eight Catholic Councillors. This was because of Gerrymandering. Gerrymandering is where councils rigged the area boundaries to ensure that Protestant councillors were elected/re-elected, so that the Protestant Government could stay in power, and therefore remain part of the United Kingdom (UK). So overall Catholics in Northern Ireland were disadvantaged and discriminated against in many different parts of everyday life. It is because of this that N.I.C.R.A (Northern Ireland Civil Right's Association) was set up, and they started to march to try an improve their lives, and go on marches to try and fight for what they believed where there rights, and to stand up against the discrimination from the local authorities and the Government. They wanted to get rid of this discrimination. Throughout history Catholics had been feared by the Protestants. This is because Protestants had always thought that the Catholics were rebellious, insulting and were following the Bible too strictly. Catholics were badly discriminated against and at a disadvantage, because of the hatred between the two groups. This made the Protestants feel like the Catholics deserved everything that they got, because of the past. ?? ?? ?? ?? Tom Hedderick Glenburn Sports College ...read more.