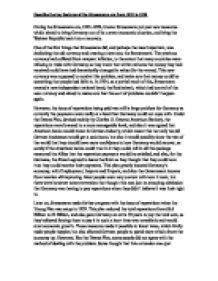 During the Stresemann era, 1923-1929, Gustav Stresemann put past new measures which aimed to bring Germany out of its current economic situation, and bring the Weimar Republic back into a recovery. One of the first things that Stresemann did, and perhaps the most important, was abolishing the old currency and creating a new one, the Rentenmark. The previous currency had suffered from rampant inflation, to the extent that many countries were refusing to trade with Germany as they knew that within minutes the money they had received could have had dramatically changed in value (for the worse). This new currency was supposed to combat this problem, and make sure that money could be something that people had faith in. In 1924, as a partial result of this, Stresemann created a new independent national band, the Reichsbank, which had control of the new currency and aimed to make sure that this sort of problems wouldn't happen again. ...read more.

Most people were very content with how it went, but there were however some extremists that thought this was just an annoying admission that Germany was having to pay reparations when they didn't believe it was their right to. Later on, Stresemann made further progress with the issue of reparations when the Young Plan was setup in 1929. This plan reduced the total reparations from �6.6 Billion to �2 Billion, and also gave Germany an extra 59 years to pay the total sum, as they believed forcing them to pay it in such a short time was unrealistic and would stunt economic growth. These measures made it possible to lower taxes, which firstly made people happier, but also allowed German people to spend more which drove the economy up. However, like the Dawes Plan, some people did not agree with the method of dealing with the problem. Some thought that this extension was just passing on the problem to a generation that hadn't even been born yet, which incensed people like Adolf Hitler, the leader of the n**i Party. ...read more.

Germany's acceptance into the League of Nations Council was a major deal and showed that Germany actually had power again, so much so that in 1926 Stresemann was actually awarded a Nobel Peace Prize for his accomplishments. Finally, in August 1928 Germany, along with 65 other countries, signed an international agreement that said they wouldn't use war to achieve their foreign policy aims, the Kellogg--Briand Pact. This was a sign that Germany was now seen as a respectable member of the international community, and really showed normal people that the Weimar Republic was working and was regaining Germany's place on the world stage. All of these measures, either helped or wholly done by Gustav Stresemann, allowed Germany to restore economic (and also political) stability. Unlike many others, Stresemann had largely managed to keep the support of parties on the left and right, and up until his death on the 3rd of October 1929 he allowed Germany to start regaining its position in the world. ?? ?? ?? ?? Describe the key features of the Stresemann era from 1923 to 1929 ...read more.