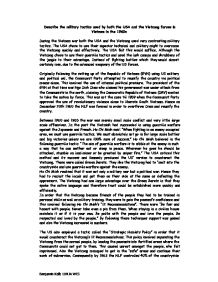 Describe the military tactics used by both the USA and the Vietcong forces in Vietnam in the 1960s During the Vietnam war both the USA and the Vietcong used very contrasting military tactics. The USA chose to use their superior technical and military might to overcome the Vietcong quickly and effectively. The USA felt this would suffice. Although the Vietcong chose to use their guerrilla tactics and used the lush canopy and shrubbery of the jungle to their advantage. Instead of fighting battles which they would almost certainly lose, due to the advanced weaponry of the US forces. Originally following the setting up of the Republic of Vietnam (GVN) using US military and political aid, the Communist Party attempted to reunify the country via political means alone. This involved the use of internal political pressure. The president of the GVN at that time was Ngo Dinh Diem who claimed his government was under attack from the Communists in the north, claiming the Democratic Republic of Vietnam (DRV) wanted to take the nation by force. This was not the case till 1959 when the Communist Party approved the use of revolutionary violence alone to liberate South Vietnam. ...read more.

In March 1965, the first US combat troops arrived in Vietnam at Danang. The US aimed to fight a battle of attrition which would wear the Vietcong down. Although the Vietcong were determined to go on till victory. In 1967 critics saw this US strategy as an indication of the fact that the US was losing the initiative and it was not even a strategy in itself. The US had never come up against guerrilla warfare on this scale before. The US troops found it hard to combat these guerrilla tactics of the Vietcong. The US no longer aimed to capture land but kill as many Vietcong as possible. Philip Caputo who volunteered to fight in Vietnam said: "The rare occasion when the VC chose to fight a set-piece battle provided the only excitement, but beyond adding a few more corpses to the body count, these encounters achieved nothing. Our mission was not to win terrain, but simply to kill. The pressure on unit commanders to produce enemy corpses was intense. It is not surprising that some men acquired a contempt for human life." ...read more.

As the numbers fell the VC took advantage by launching attacks on ARVN forces near Hue, around Kantoum and Saigon. The US did send massive supplies to help but the ARVN had lost all will to fight, hence by 1975 Vietnam was all Communist. The war was fought between both forces in very different ways. The US used their superior weaponry in conventional warfare and used a policy of attrition which was destined for failure against the guerrilla warfare tactics of the VC. The Vietcong chose not to fight the South Vietnamese people by angering and disrespecting them. The VC tried to be their friends. The US failed to do this and consequently they found no help from the people. The Vietcong were very good at this form of warfare and were very brave and committed. The US soldiers were attacked day and night and lost much sleep. Although the VC where aided by Russia in the form of military hardware. Without this the task would been far harder. Although it was the adaptability, perseverance and strength of mind that allowed the VC to defeat their foes so effectively. As well as US complacency and arrogance. Benjamin Kolb 11MJA WCS ...read more.