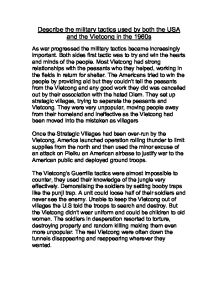 Describe the military tactics used by both the USA and the Vietcong in the 1960s As war progressed the military tactics became increasingly important. Both sides first tactic was to try and win the hearts and minds of the people. Most Vietcong had strong relationships with the peasants who they helped, working in the fields in return for shelter. The Americans tried to win the people by providing aid but they couldn't tell the peasants from the Vietcong and any good work they did was cancelled out by their association with the hated Diem. ...read more.

The Vietcong's Guerrilla tactics were almost impossible to counter, they used their knowledge of the jungle very effectively. Demoralising the soldiers by setting booby traps like the punji trap. A unit could loose half of their soldiers and never see the enemy. Unable to keep the Vietcong out of villages the U.S told the troops to search and destroy. But the Vietcong didn't wear uniform and could be children to old women. The soldiers in desperation resorted to torture, destroying property and random killing making them even more unpopular. The real Vietcong were often down the tunnels disappearing and reappearing wherever they wanted. ...read more.

The Vietcong were now strong enough to fight in the open, they had gathered U.S. weapons and unexploded bombs to make grenades, nothing had been left to waste. During the tet festival when gun shots were confused with fire works and the U.S. had declared a cease fire the tet offensive began. Vietcong attacked American airbases all over the country. A suicide Vietcong mission broke into the U.S. embassy they were all killed but they achieved their aim the American public was outraged they had been led to believe that they were winning the war. But if they couldn't even secure the U.S. embassy! Public support of the war in America died and Johnson had no choice but to pull troops out of Vietnam. ...read more.