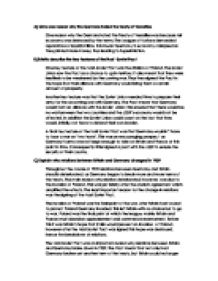 Describe The Nazi-Soviet pact. Explain why relations between Britain and Germany changed in 1939

A) Give one reason why the Germans hated the treaty of Versailles One reason why the Germans hated the Treaty of Versailles was because teir economy was destroyed by the terms. The League of Nations demanded reparations of �6,600 million, this meant Germany's economy collapsed as they printed more money, thus leading to hyperinflation. B) Briefly describe the key features of the Nazi-Soviet Pact One key feature of the Nazi-Soviet Pact was the division of Poland. The Soviet Union saw the Pact as a chance to gain territory. It also meant that they were less likely to be weakened by the coming war. Thus they signed the Pact in the hope that their alliance with Germany would bring them a certain amount of prosperity. ...read more.

C) Explain why relations between Britain and Germany changed in 1939 Throughout the course of 1939 relations between Germany and Britain steadily deteriorated, as Germany began to break more and more terms of the treaty. The main reason why relation deteriorated, however, was due to the invasion of Poland. This was just briefly after the Munich agreement which amplified the effects. The least important reason for the change in relations was the signing of the Nazi-Soviet Pact. The invasion of Poland was the flashpoint of the war, after Britain had vowed to protect Poland Germany invaded. This left Britain with no choice but to go to war. Poland was the final point at which the league, mainly Britain and France must abandon appeasement and commence rearmament. ...read more.

It showed that Germany could no longer be trusted. The Munich agreement was the least important reason why relations changed between Britain and Germany in 1939. Chamberlain was desperate to avoid a war with Germany, thus he agreed to give Germany the Sudetenland in return for the promise that Hitler would make no further demands for territory. Chamberlain returned from the meeting with false hope claiming 'peace in our time'. However when Germany signed the Nazi-Soviet Pact and invaded Poland Britain felt betrayed. Hence the breakdown in relations between Britain and Germany in 1939. In conclusion the most important reason for the breakdown in relations between Britain and Germany was the invasion of Poland. It left Britain with no choice but to go to war, they had promised Poland military protection in the event of an invasion. They had to fulfil this promise when Hitler invaded. ...read more.