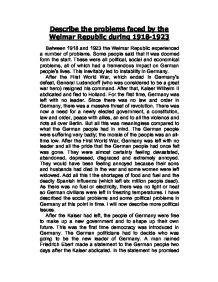 Describe the problems faced by the Weimar Republic during 1918-1923.

Describe the problems faced by the Weimar Republic during 1918-1923 Between 1918 and 1923 the Weimar Republic experienced a number of problems. Some people said that it was doomed form the start. These were all political, social and economical problems, all of which had a tremendous impact on German people's lives. This inevitably led to instability in Germany. After the First World War, which ended in Germany's defeat, General Ludendorff (who was considered to be a great war hero) resigned his command. After that, Kaiser Wilhelm II abdicated and fled to Holland. For the first time, Germany was left with no leader. Since there was no law and order in Germany, there was a massive threat of revolution. There was now a need for a newly elected government, a constitution, law and order, peace with allies, an end to all the violence and riots all over Berlin. But all this was meaningless compared to what the German people had in mind. The German people were suffering very badly; the morale of the people was an all-time low. After the First World War, Germany was left with no leader and all the pride that the German people had once felt was gone. They were almost certainly feeling devastated, abandoned, depressed, disgraced and extremely annoyed. They would have been feeling annoyed because their sons and husbands had died in the war and some women were left widowed. ...read more.

The treaty created an outrage among the German people. Initially, Germany had refused to sign it but they had to. If they didn't then the Allies would've invaded Germany. The German politicians arrived at Versailles to sign the treaty. Rather than hand the rest of Germany's navy to the allies. They sank their ships as a last sign of defiance. The German politicians came home from Versailles as so-called 'November Criminals'. The German people were livid that the politicians signed the Treaty of Versailles; they claimed that by signing the treaty the politicians had stabbed Germany in the back. They refused to see that by not signing the treaty the penalty would have been invasion by the Allies. The German people felt that the treaty was highly unfair and unjust. For these reasons and others, Germany looked for someone to blame. The Weimar Republic was made the scapegoat of Germany. Many people were ready for revenge after WW1 and the treaty of Versailles. It was no wonder that after all these problems there would be attempts to seize power. The first one came in March 1920 - The Kapp Putsch. Wolfgang Kapp was the leader of the Freikorps. The Kapp Putsch was a direct threat to Ebert's government. Once again, Ebert moved to a safer place. The Freikorps marched into Berlin and seized power easily. Kapp received support from General Ludendorff and the German military. ...read more.

The uprising, however, was poorly planned and executed. On 9 November 1923, Hitler, Ludendorff and 3000 SA men marched on Munich's army headquarters. On the way they met a police barricade, which opened fire, killing sixteen Nazis. Hitler was arrested and sentenced to five years imprisonment. Ludendorff was found not guilty. As a result of the Munich Putsch, Hitler spent nine months in the Landsberg Prison and he was banned from speaking publicly. The Nazi party was also banned. Whilst in prison, Hitler wrote Mein Kampf, which allowed him to work out his own beliefs. It also provided a 'Bible' for the Nazi Party which later on seized power. So Weimar Germany was like a hellhole during 1918 to 1923. One problem after another, firstly the Treaty of Versailles, then the hyperinflation crisis, Germany was definitely ruined. But in my opinion, the one thing that was the whole cause for all these problems was the treaty of Versailles. Firstly, when the treaty was signed the Weimar Republic gained the mistrust of most Germans, that's the social problem. Secondly, the reparations cost led to Germany not being able to pay the second instalment, which eventually led to hyperinflation, this is the economical problem. The treaty of Versailles also led to the Munich Putsch. The treaty led, either directly or indirectly, to a situation in Germany where the people felt let down, they wanted to blame someone. A government is no use without the trust of its people. It's the same everywhere, in every time period, in every country, without the people's support you're doomed to failure. ...read more.