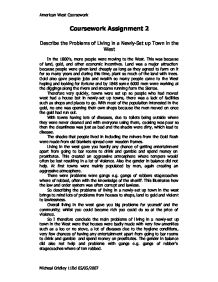 Describe the Problems of Living in a Newly-Set up Town in the West.

Coursework Assignment 2 Describe the Problems of Living in a Newly-Set up Town in the West In the 1800's, more people were moving to the West. This was because of land, gold, and other economic incentives. Land was a major attraction because people were given land cheaply as long as they agreed to farm on it for so many years and during this time, plant so much of the land with trees. Gold also gave people jobs and wealth so many people came to the West hoping and looking for fortune and by 1848 some 6000 men were working at the diggings along the rivers and streams running form the Sierras. Therefore very quickly, towns were set up so people who had moved west had a house but in newly-set up towns, there was a lack of facilities such as shops and places to go. With most of the population interested in the gold, no-one was opening their own shops because the men moved on once the gold had run out. With towns having lots of diseases, due to toilets being outside where they were never cleaned and with everyone using them, cooking was poor so then the cleanliness was just as bad and the shacks were dirty, which lead to disease. ...read more.

Geographical factors were: the west was a vast area and transport was very slow. This made it very difficult to enforce Law and Order. Political factors were that the new mining and new towns sprang up so quickly that there were particularly lawless in their early years. There was a shortage of reliable law-enforcements officers and politicians and they didn't think the issue was important enough to spend money on employing and training more or better officers. Social factors were that there were any potential sources of conflict between the different ethnic groups. After the Civil War, thousands of soldiers, confederates and unionists were demolished. For many readjusting to civilian life was difficult. Also many people on both sides were unable or unwilling to forgive or forget what had happened. Economic factors were that many potential sources of conflict between the different economic groups, for example; between cowboys and townspeople, homesteaders and ranchers, miners and hunters, sheep herders and ranchers or cattle barons and small ranchers. Also, the west was dominated by a primitive code of honour. It was your responsibility to settle things yourself. You had no duty to retreat in a confrontation. Since most westerners carried guns, this meant that an argument could end in a shooting. If you shot a man in self-defence, then you had not broken the law, as long as the other man was armed. ...read more.

The women biggest roles were on the plains, they had jobs like having to operate a chain of restaurants in many rough mining communities. Publishing newspapers and delivering them, manage programmes for the US, and stuffing animals (taxidermy). They also served as missionaries bringing Christianity and education to the Indians. They often bought about trouble; this was because of the morale balanced gender, or such things as being members of lethal gangs. The main problems of living in the West were that the towns were quickly set-up, they towns were male populated, r****m, law and order in control by the government could not cope with rises in the number of towns and rises in violence. Also vigilantes were set and agencies were used as early as 1820, debateable to how successful they were at solving these problems. Overall I think that the vigilantes causes or involved with much more of the problems that came with living in the West. The vigilantes basically went round doing as they wanted without getting caught and killing mostly black or Mexican women. They tackled every problem but in the wrong way. Where as the women tried to solve problems by having more than one job and opening stores. Vigilantes did not deal with any problems correctly or try to help problems for the whole town just for themselves. The women contributed quite heavily to solve problems in towns in the West. American West Coursework Micheal Gridley 11Bd 05/05/2007 ...read more.