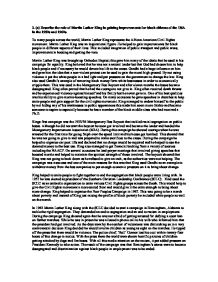 Describe the role of Martin Luther King in gaining improvements for black citizens of the USA in the 1950s and 1960s.

2. (a) Describe the role of Martin Luther King in gaining improvements for black citizens of the USA in the 1950s and 1960s. To many people across the world, Martin Luther King represents the African American Civil Rights movement. Martin Luther King was an inspirational figure .He helped to gain improvements for black people in different aspects of their lives. This included integration of public transport and public areas, improvements in housing and getting the vote. Martin Luther King was brought up Orthodox Baptist; this gave him many of the ideals that he used in his campaign for equality. King believed that he was not a natural leader but that God had chosen him to help black people and if necessary he would devote his life to the cause. Gandhi had a huge influence on him and gave him the idea that a non-violent protest can be used to gain the moral high ground. By not using violence it put the white people in a bad light and put pressure on the government to change the law. King also used Gandhi's example of removing black money form white businesses in order to economically cripple them. This was used in the Montgomery Bus Boycott and after eleven months the buses became desegregated. King often proved that he had the courage to not give in. King often received death threats and he experienced violence against himself and his family but he never gave in. ...read more.

One of his most famous campaigns was the March on Washington in 1963 that included the world renowned "I have a dream" speech. The march marked the centenary of the Emancipation Proclamation, which promised the abolition of slavery. King made the emphasis on freedom and again King helped to unite black and white people who would march together. At the end of the march King gave his speech to 250,000 people this speech help to raise black people's morale and helped to increase support for an end to discrimination. The event portrayed a positive image of the Civil Rights Movement to America and the rest of the world. The march gave the President extra leverage to urge support for the civil rights legislation. Another important victory for King was in Selma in 1965. King targeted this area because black people were prevented from voting by being forced to take tests that were near enough impossible to pass or not being able to get registered as the courthouse was frequently not in session for registrations. Also the sheriff of Dallas County was a man called Jim Clark who was seen on the television poking electric cattle prods in the stomachs of black people queuing to get registered. King arranged a march from Selma to Montgomery, the first of which was met by the police who violently forced the marchers back. King then arranged another march for two days later however due to legal doubts King made a compromise and stopped everyone at the bridge when requested to turn back. ...read more.

King was able to give morale-boosting speeches at exactly the right moments for example at the March on Washington. He also gave speeches at many churches to gain support for the various campaigns that he helped to organise and this helped to unite people with the common goal of gaining equality in all aspects of life. Although he did not start the Montgomery Bus Boycott, when he became leader he organised the car pools and used the donations to fund the transport. In the Birmingham campaign it was his idea to start using children and this change of tactic was the turning point that made 'Bull' Connor lose his cool and use violence against the marchers. King did not have to help the civil rights movement and he had plenty of good reasons to give up on the campaign when he started to receive death threats however he refused to give up. One of Kings principles was that the non-violent protest would bring about change. This is very important because it gave black people the moral high ground and with the increase in television ownership in America and the rest of the world it disgraced the government to change the law. King also believed that success could be achieved through the American legal system and this prompted him to have several discussions with various presidents and this made it hard for them to ignore the subject of civil rights. King knew that he would give his life to the cause and when he was killed in 1968 he became a martyr to the cause and the symbol of black peoples struggle for equality. ...read more.