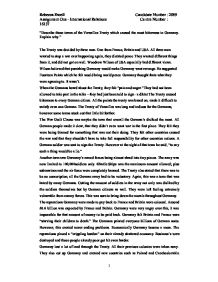 &quot;Describe those terms of the Versailles Treaty which caused the most bitterness in Germany

"Describe those terms of the Versailles Treaty which caused the most bitterness in Germany. Explain why." The Treaty was decided by three men. One from France, Britain and USA. All three men wanted to stop a war ever happening again, they dictated peace. They wanted different things from it, and did not get on well. Woodrow Wilson of USA especially had different views. Wilson believed that punishing Germany would make Germany want revenge. He suggested Fourteen Points which he felt would bring world peace. Germany thought thats what they were agreeing to. It wasn't. When the Germans heard about the Treaty, they felt "pain and anger." They had not been allowed to take part in the talks - they had just been told to sign - a diktat.The Treaty caused bitterness to every German citizen. ...read more.

The Treaty also stated that there was to be no conscription, all the German army had to be voluntary. Again, this was a term that was hated by many Germans. Cutting the amount of soldiers in the army not only was disliked by the soldiers themselves but by German citizens as well. They were left feeling extremely vulnerable from enemy forces. This was sure to bring down the morale throughout Germany. The reparations Germany were made to pay back to France and Britain were colossal. Around �6.6 billion was expected by France and Britain. Germany were very angry over this, it was impossible for that amount of money to be paid back. Germany felt Britain and France were "starving their children to death." The Germans printed everyone billions of German notes. However, this created never ending problems. ...read more.

This was like a protection scheme. All countries within it protected each other. Although in the long term the League of Nations did not work out, the fact Germany were forbidden to join from the start left bitterness in German mouths. Most Germans really disliked the whole Treaty. The fact they hadn't had any say in it left a bitter taste. However the German citizens were not only angry with Britain and France. Many Germans felt that their own government was at fault and had let them down. The governments reply to that was they had "no choice" but many Germans wouldn't accept that point of view, they felt betrayed. In conclusion all Germans hated the treaty for one reason or another; they didn't want to sign it. However I think from the moment the German's saw the treaty they felt at some stage they would have "vengeance." ?? ?? ?? ?? Rebecca Excell Candidate Number : 2089 Assignment One - International Relations Centre Number : 16137 ...read more.