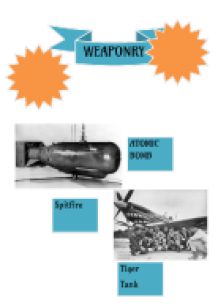 Describing Advances in Weaponry in WW2.

They allowed armies to use the skies to attack and b**b. Planes also added speed to an attack because they were fast and they increased the element of surprise and this is seen in tactics such as Blitzkrieg which caused great confusion as planes bombed the city causing panic and havoc. A key turning point was Roland Garros?s deflectors on the propellers of the plane. This meant that if the plane was shot on the propellers it could still fly as the bullets were deflected so they could do no harm to the engine or the chassis. Another key turning point was the bulletproof glass as now the pilots were safer in their cockpits and this save a lot of lives as pilots were not hit by shrapnel or bullets. Overall a key turning point was technology to as the armour of the planes became lighter without any significant loss in durability. This gave the planes a lot more speed and manoeuvrability; this was vital in dogfights and it gave planes an advantage. Planes now could also carry bombs and a lot more fuel so they could b**b targets and travel larger distances. With the invention of the first jet fighter plane by the Germans the planes were now faster and better. They could withstand more damage and carry better weaponry and this was a major turning point. And finally I would like to mention the Supermarine Spitfire which was an amazing plane and it played a major role in the English RAF squadron. The Spitfire was a tight-turning and nimble plane. It played an huge role in stopping the dive-bomber (Stuka) German invasion force in the Battle of Britain. It was huge in dogfights due to its ability to move around and this was very important. Finally the atomic b**b itself was a key turning point however the discovery of plutonium helped make the b**b more reactive. ...read more.

Planes played a large role in key battles and tactics such as Blitzkrieg and the Battle of Britain. Planes were now used to b**b specific targets, attack other planes and drop troops in enemy territory. This was an outstanding advancement as now aerial attacks were more prominent and feared. Planes also got bullet proof windshields and this meant fewer casualties and they also got deflectors which meant less plane losses and propellers could now deflect incoming attacks. Planes also became faster again due to them being made out of better material so they are lighter and this helped them a lot. Again what stayed the same with the planes was that their shape was still maintained throughout the war as it was considered aerodynamic and very good. The atomic b**b was first used on Japan. I chose this because two of these bombs (Little Boy and Fat Man) ended the war in Japan within one week and caused Japan to surrender and it changed weaponry forever. This one invention caused all other countries to start developing their own bombs after realising the devastation is can cause and how efficient it is as a weapon. The resource used which was plutonium stayed the same throughout the time period as it was more destructive and more efficient. My topic which consisted of tanks, planes and the atomic b**b changed warfare as it meant the wars were no longer man to man as now machines were involved. Tanks and planes became a must and as they got better more people started to realise their potential. As you can see today tanks and still carry the basic shape seen in World War I and II and are still used. Also the atomic b**b completely changed warfare because this led to nuclear weapons being developed and it opened up a whole new type of warfare nuclear warfare. In that certain time period my topic completely changed warfare as the advancements and inventions of planes, tanks and the atomic b**b made huge differences to battle tactics and how the wars were fought. ...read more.