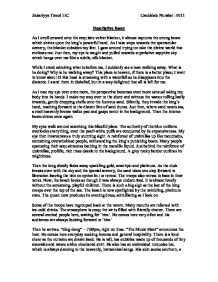 Descriptive Essay - As I stroll onward onto the exquisite velvet blanket, it almost captures the strong beam which shines upon the king's powerful hand.

Descriptive Essay As I stroll onward onto the exquisite velvet blanket, it almost captures the strong beam which shines upon the king's powerful hand. As I take steps towards the spectacular scenery, the blanket subsides my feet. I gaze around trying tot take the divine world that encloses me. Just then, my eye is caught and pulled towards superlative sapphire sky which hangs over me like a subtle, silk blanket. While I stand admiring what is before me, I suddenly see a man walking away. What is he doing? Why is he walking away? This place is heaven, if there is a better place; I want to know about it! His head is streaming with a waterfall as he disappears into the distance. I stand there in disbelief, but in a way delighted that all is left for me. As I cast my eye over once more, the perspective becomes even more sensual taking my body into its hands. ...read more.

As the dusk breaks even with the sky and the special scenery, the sand takes one step forward to liberation leaving the tide no option but to retreat. The troops also retreat to base in their tanks. Now, the beach looks as though it was always undisturbed. It is almost lonely without the screaming, playful children. There is such a big sigh as the last of the king creeps over the top of the sea. The beach is now spotlighted by the twinkling, platinum stars. The queen now produces its evening dress, scintillating as I look on. Some of the troops have regrouped back at the tavern. Many mouths are relieved with ice-cold drinks. The atmosphere is cosy; the air is filled with friendly chatter. There are several excited people here, waiting for 'him'. He comes here very often and his audiences are always looking forward to 'him' Then he arrives. ...read more.

Countless waves grouped up and danced to the shore, what a picturesque scene! The time is now 7:30pm and the "Music Man" has gone into hibernation until tomorrow. Now all is quiet but for the sound of water splashing away. I spoke too soon. Now the rain has set in, earlier than usual. The sullen winds were soon awake pushing forcefully against the handsome palace. It whistled past my ears. Its presence felt by the sand, sea and the stars. I make my way to my house and turn the key in the lock. My house stands tall over viewing the divine atmosphere. Inside, the kitchen, the centre of the house in every way, is always warm. Its gentle rosy glow seeping out and spreading throughout the house. My mum's cooking always generates fantastic smells, some familiar, some age-old and some exotically new and different. But for now the bliss world that enraptures me rests, until tomorrow when life will proceed back to normality. Zakariyya Timol 11C Candidate Number : 9211 ...read more.