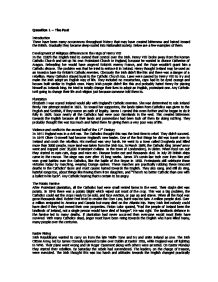 Development of Irish hatred for the British

Question 1 - The Past Introduction There have been many occurrences throughout history that may have created bitterness and hatred toward the British. Gradually they became deep-rooted into Nationalist society. Below are a few examples of them. Development of Religious differences in the reign of Henry VIII In the 1530's the English tried to extend their control over the Irish. Henry VIII broke away from the Roman Catholic Church and set up his own Protestant Church in England, because he wanted to divorce Catherine of Aragon. Beheading her would have angered Britain's enemy France, and the Pope wouldn't grant him a Catholic divorce. The problem was that he tried to enforce it in Ireland. Henry thought Ireland may be used as an invasion base for Britain's Catholic enemies. Obviously the Irish didn't like this and there was a danger of a rebellion. Many Catholics stayed loyal to the Catholic Church too. Laws were passed by Henry VIII to try and make the Irish adopt an English way of life. They included no moustaches, caps had to be dyed orange and houses built similar to English ones. ...read more.

One of the first things he did was travel over to Ireland and crush the rebellion. His method was very harsh. He went to a town called Drogheda and killed more than 3000 people, more land was taken from the Irish too. In March 1689, the Catholic King James' army went and trapped over 35,000 Protestant civilians in the town of Londonderry, in Ulster. When food ran out they started to eats cats, dogs and mice etc. Disease broke out and thousands died. In July 28 British ships came to the rescue. The siege was over after 15 long weeks. James II's son-in-law took over from him and won great battles over the Catholics, like the battle of the Boyne in 1690. Protestants still celebrate these victories today by marching, wearing Orange sashes. These marches are practically rubbing these innocent deaths in the Catholics' faces and must causes hatred towards the English. They also sang, and still do sing, hateful songs too, about things like freeing them from slaughter, and "There's no better Catholic than one with a bullet in his back". ...read more.

The Irish Citizen Army, led by James Connolly planned to take over Dublin at Easter 1916, while England was off fighting in WWI. Their plans went wrong and Sir Roger Casement along with others were arrested. On Easter Monday they started their rebellion. By Saturday the rebels had surrendered. The leaders, on the charge of treason, were executed. The Irish thought this was too harsh and attitudes towards the English changed practically overnight. The rebels who had tried to take over Dublin hated this and most Irish people started to despise the British. Conclusion Overall, the British have attacked the Irish many times over the centuries, starting from when it was first populated. During these attacks many people died or lost all their lands. Probably what angered them the most is they had done nothing to provoke it. English kings were mainly to blame for this hurt and suffering. Children growing up affected by these things are certain to grow up loathing Britain for their problems. These children have children of their own, and the resentment is passed down. These feelings would spread and eventually most of Ireland would resent Britain. These feelings would influence rebellions, such as those similar to the IRA. These attacks hinder progress, and just create more friction and problems. Ryan Turton ...read more.