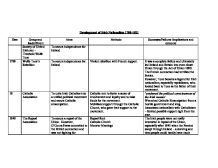 Development of Irish Nationalism 1798-1921 Date Group and leader/Event Aims Methods Successes/Failures /implications and outcome Society of United Irishmen - Theobold Wolfe Tone To secure independence for Ireland 1798 Wolfe Tone's Rebellion To secure independence for Ireland Violent rebellion with French support. It was a complete failure and ultimately led Ireland and Britain into even closer Union through the Act of Union 1800. The French connection had terrified the British. However, Tone became a legend for Irish nationalism, especially republicans, who looked back to Tone as the father of their movement. 18 Catholic Association To unite Irish Catholics into a unified political movement and secure Catholic emancipation. Catholic rent to foster a sense of involvement and loyalty and to raise funds for the movement. Mobilised support through the Catholic Church, who gave their support to the movement. 'awakened the political consciousness of the Irish masses' . Wrenched Catholic Emancipation from a hostile government and king. Associated nationalism with Catholicism - limited possible support right from the start. 1840 The Repeal Association To secure a repeal of the Union. However, O'Connell was committed to the British connection and was not fighting for independence. Repeal Rent Catholic Church Monster Meetings The Irish people were not really interested in repeal of the Union, especially after 1845 when the Famine swept ...read more.

1910 Constitutional crisis Redmond used it to get Asquith to promise a HR bill in the next Parliament. It worked. 1912 Third Home Rule Bill The Lords could not block it forever, and it was clear that Home Rule would eventually happen, but not for two years. 1913 Irish Volunteers formed. To keep up with Unionist developments - to insure the Irish were not left behind and could exert as mush pressure on the government as Ulster. To fight for HR were It necessary. The Irish situation deteriorated further. Tensions were raised . 1914 Home Rule can come into operation, but it was clear that the 1912 Bill was not feasible. 1914 The First World War - Irish question shelved The government was impressed by the nationalists' show of support and put HR on the statute books. However, as the war dragged on, support for it waned, but more importantly, nationalists grew impatient and 'the revolutionaries were soon to advance to the centre of the stage'. IV's split, & a small group of revolutionaries formed their own group - the 'Irish Volunteers'. Redmond's group became the 'Nationalist Volunteers' Eon Mac Neill's group wanted to gain power in Ireland with the support of the Irish people and proclaim an independent Irish Republic through an armed insurrection like Tone's. ...read more.

Politicians on both sides had lost control of their forces. 1920 Government of Ireland Act Autumn 1920 LG deployed more troops to Ireland and declared martial law in the south. To enforce the GIA and destroy the IRA and its support. The normal rules of warfare did not apply - it became a guerrilla war, and the actions of the government forces matched if not exceeded those of the IRA in their brutality and ferocity. Public and political opinion was horrified by the actions of the Black and Tans, and the Irish became even more anti-British and even less willing to compromise. 1921 'a revolt of the British conscience... obliged Lloyd George to seek terms of peace and settlement with SF' (G. Boyce) Articles of Amendment To end the war and reach a peaceful settlement, appreciating now that SF and the IRA were not a small murder gang, but a popular movement with mass support. SF decided to accept LG's offer of dominion status with an oath of allegiance (although it was very weak) to the crown. De Valera was not happy with the oath, but the majority of Irishmen and the majority of the Dail were, and the Catholic church also accepted it. The Treaty was signed, and Ireland became a dominion of GB, with more power than O'Connell, Parnell or Redmond could have dared hope for (or even wanted!). Two years of civil war followed. ...read more.