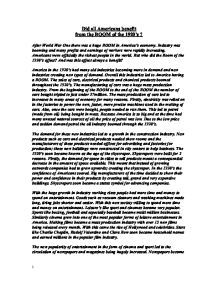 Did all People Benefit from the Boom

Did all Americans benefit from the BOOM of the 1920's ? After World War One there was a huge BOOM in America's economy. Industry was booming and many profits and earnings of workers were rapidly increasing. Americans were officially the richest people in the world. But who did the Boom of the 1920's affect? And was this affect always a benefit? America in the 1920's had many old industries becoming more in demand and new industries creating new types of demand. Overall this industries led to America having a BOOM. The sales of cars, electrical products and chemical products boomed throughout the 1920's. The manufacturing of cars was a huge mass production industry. From the beginning of the BOOM to the end of the BOOM the number of cars bought tripled to just under 27million. The mass production of cars led to increases in many areas of economy for many reasons. Firstly, electricity was relied on in the factories to power the new, faster, more precise machines used in the making of cars. Also, once the cars were bought, people needed to run them. ...read more.

However many people did not benefit from the BOOM. Many people grew further into poverty and by 1928 about 42% of the American population were left in poverty by the negative effects of the BOOM. The disadvantageous effects of the BOOM mainly harmed the older industries. Farming is an example of this. Over half of American people lived in rural areas in the 1920's leaving them to make their money by either farming or supplying farmers, possibly with machinery. The great increase in technological change led to new, faster machines being made and used. However this had many negative effects for farmers. Obviously the machines started to replace people on farms to improve production; this increased the amount of unemployment in the country. Also, the technological change caused the farmers making more product then needed in America. Seeing as this was post war production, America did not need to supply Europe with food. This made the food cheaper because the farmers needed to sell it which led to them getting less profit. A huge amount of farmers' income dropped. These farmers found paying mortgages impossible and many were forced to sell their land to clear debts. ...read more.

and in their product (by using new man made materials). All of this improved their business by making their product cheaper to create and more desired by the market thus increasing the profits massively. However the BOOM also ruined many peoples lives. People working in older industries suffered because their product was being replaced with better, man made materials demanded by the market. 'Outsiders' such as blacks and immigrants also suffered because many Americans refused to employ them. They saw them as outsiders and not as true Americans. Looking at the facts we know that the richest 5% of the population in America shared 32% of the wealth of America - each person in this category had over 6% of the overall wealth in America at the time. However the poorest 42% of people in America shared only 10% of the overall wealth - giving each person around 0.2% of American wealth. Some Americans were 30 times more wealthy then other Americans! This shows the widespread of Americans. Overall the BOOM made some people very, very rich but it also made many more people very, very poor. The BOOM in America did not benefit all Americans, almost half of the American population were living in poverty in the 1920's. 1 ...read more.