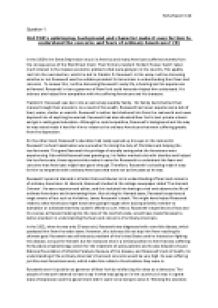 Did FDRs upbringing, background and character make it easy for him to understand the concerns and fears of ordinary Americans?

﻿Noha Nassim 11G Question 1: Did FDR?s upbringing, background and character make it easy for him to understand the concerns and fears of ordinary Americans? (8) In the 1930?s the Great Depression struck in America and many Americans suffered severely from the consequences of the Wall Street Crash. Their former president Herbert Hoover hadn?t taken much interest in the massive economic problems that were going on in the country. This apathy cost him the next election, which he lost to Franklin D. Roosevelt. In this essay I will be discussing whether or not Roosevelt was the suitable president for Americans in understanding their fears and concerns. To answer this, I will be discussing Roosevelt?s early life, schooling and his experiences at Harvard. Roosevelt?s rise to governor of New York could have also helped him understand. His sickness also helped him sympathise with the suffering Americans and his character. Franklin D. Roosevelt was born into an extremely wealthy family. His family had inherited their money through their ancestors. As a result of his wealth, Roosevelt had never experienced a lack of food, water, shelter or warmth. ...read more.

In the 1921, when he was only 39 years old, Roosevelt was diagnosed with a terrible disease, which paralysed him from the waist down. However, this sickness did not stop him from reaching his ultimate goal. Roosevelt was still elected president of the United States and he insisted on fighting this disease, not just for himself, but for everyone else in a similar position to him that was suffering. He founded a hydrotherapy centre for the treatment of polio patients and he also helped to found National Foundation of Infantile Paralysis. Because of this disease, and Roosevelt?s lack of health, his understanding of the ordinary American?s fears and concerns would be very high. He was suffering just like most Americans were, which made him relate to the situations they were in. Roosevelt won his position as governor of New York by reinforcing his views as a democrat. The people of new york wanted to have a say in what was going on in the country as it was in a great state of depression and the government didn?t seem to be trying to solve it. ...read more.

Also by losing his father to a horrible disease at such a young age, Roosevelt could relate to how the Americans felt when losing one of their family members to something they could not prevent. This helped him understand the loss that ordinary, suffering people felt at the time of the depression. Other relatable events Roosevelt went through, was his sickness of Polio. Roosevelt suffered for years trying to cure the disease, so he knew what it felt like to be weak and hopeless which is how most Americans felt at the time. Also, Roosevelt?s open mind, contributed to his democratic views which meant that everyone had a say in what went on in the government, this would help him understand the views of the public and try to work on improving the conditions that ordinary Americans had to live in during the depression. Roosevelt?s character was definitely the main factor, which had helped him empathise and understand the fears and concerns that ordinary Americans had at the time of the depression. Roosevelt was determined to offer the Americans a more civilised living standard. ...read more.