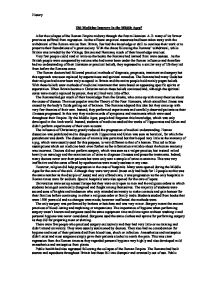 Did Medicine Improve In the Middle Ages?

Did Medicine Improve In the Middle Ages? After the collapse of the Roman Empire midway through the first millennium A.D. many of its former provinces suffered from regression. As the affluent empirical resources had been taken away with the withdrawal of the Roman armies from Britain, few had the knowledge or skill to continue their work or to preserve their foundations of a great society. With the chaos following the Romans' withdrawal, while Britain was invaded by the Vikings, Saxons and Normans, much of their knowledge was lost. Very few people could read or write so the books the Romans had learned from were useless. As the British people were conquered by nations who had never been under the Roman influence and therefore had no understanding of their literature or practical beliefs, they regressed to a similar way of life they led from before the Romans came. The Roman doctors had followed practical methods of diagnosis, prognosis, treatment and surgery but this approach was soon replaced by superstitious and spiritual remedies. ...read more.

Doctors did not perform surgery, which was seen as a vulgar practise, but instead relied heavily on astrology and the examination of urine to diagnose illnesses and prescribe treatments. Indeed, many doctors never saw their patients but were only sent a sample of urine to examine. This was very ineffective and the cures offered by apothecaries were mostly useless in any case. However, religion did help progression in the case of hospitals. Many were opened during the Middle Ages for the care of the sick. Although they were very small (most only had beds for 12 people as this was the same number as the disciple of Jesus) and only offered care, it was progression as the only hospitals in Roman times were for soldiers. Special hospitals were also opened for the care of lepers. Universities were set up across Europe but they were only open to men and the religious orders to which students belonged continually disagreed and fought among themselves. The majority of students were second sons of knights and tradesmen who only attended university to make contacts and gain honour for their families before continuing in either a religious order or family trade. ...read more.

It was spread by flea-carrying rats from Asia, which came to Europe via trade routes and ships on the Mediterranean. People panicked and most resorted to prayer and life-size offering of candles. They believed that it came from God, who was punishing them for their sins. The wealthy fled to the countryside while the poor stayed in the overcrowded towns to die. People who caught the plague were shut inside their houses with their families. Many theories were developed about how the plague was spread. Most people thought it was spread by bad smells in the air and no one attributed it to the rats. The Middle Ages was a time of serious regression and very little progress was made. This was mainly because of the influence of Christianity and the hysterical witch-hunts that led to people being too scared to oppose the rulings of the Church. Its influence was so powerful that until the time of Henry VIII the Church had more power then the King. People forgot the Roman ways of thinking and instead adopted and re-learned the pagan beliefs of Britain's conquerors, including those which affected medicine. History ...read more.

This answer is extremely detailed and it is unlikely any one would produce this much under timed exam conditions. It ha a great deal of accurate and relevant knowledge of the issues and the writing is really clear and well organised. In some places there could have been more analysis / explanation linked to the issue of progress and how much change there was. ****