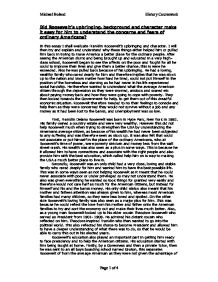 Did Roosevelt's upbringing, background and character make it easy for him to understand the concerns and fears of ordinary Americans?

Did Roosevelt's upbringing, background and character make it easy for him to understand the concerns and fears of ordinary Americans? In this essay I shall evaluate Franklin Roosevelt's upbringing and character. I will then try and explain and understand why these things either helped him or pulled him back in trying to make America a better place for the ordinary people. After seeing the American slums and being brought up and educated in a very high- class school, Roosevelt began to see the affects on the poor and fought for all he could to improve their lives and give them a better chance, this is were he exceeded. Also he was pulled back because of his upbringing. He had a loving, wealthy family who cared dearly for him and therefore implies that he was stuck up to the nation and know matter how hard he tried, could not put himself in the position of the homeless and starving as he had never in his life experienced social hardship. He therefore wanted to understand what the average American citizen through the depression as they were worried, anxious and scared etc about paying money back and how they were going to cope with poverty. They then looked towards the Government for help, to get them out of this dreadful economic situation. ...read more.

He later found out that he had contracted Poliomyelitis (Polio), a crippling viral disease that left him paralysed from the waist down for life. However many good things came about from his illness, as it allowed Roosevelt to look at the world from different angles. He refused to accept that he was paralysed and stood up at public speeches. This was very good as it showed the American people how much they meant to him and that he was not all weak and could fight off anything that threatened him and therefore with the help of the nation Roosevelt and the citizens could fight off poverty together. He showed his will to come over this as he trained every day for the next seven years to walk again, which reflects to the Americans, how he would do all he could no matter how much effort it took to help them out and make their lives better in as many ways as he could. He showed his enthusiasm and kind side by using family money to help others and his own money to establish foundations to help other Polio victims. This was a good reason as it showed Roosevelt out to be thoughtful which lead him onto trying to help out all the American people. Also allowing himself for once in his life to be able to associate and emphasise with other sufferers, so that he knows ...read more.

Roosevelt also helped out with soup kitchens so that the homeless and starving would at least have a place to go. He therefore saw this as a challenge, to do as much as he could to minimize suffering. Overall, I feel that although in many ways his background, character and upbringing did not help him at times, as he was never allowed to see and understand what it was like to be an ordinary American citizen. Alternatively, it helped him in many other ways and pushed him into the right direction, until he was able to reach his goal. This is because at the time of the American depression, all of the public lost their money to banks etc., therefore unexpectedly being put into poverty. It was then Franklin Roosevelt's job to turn this around and we can see that he did this greatly, as the USA again became the most powerful and richest country. This in turn showed Roosevelt's popularity as he was elected to be President three times, which was never achieved before! He also brought the Americans pride back, as their money and power had gone leaving them defenceless and vulnerable therefore taking their two most precious commodities away. This resulted in Roosevelt acting instantly to restore in building up the country again and brought back a good standard of living for the ordinary American civilians. Michael Boland History Coursework Page 1 of 4 ...read more.