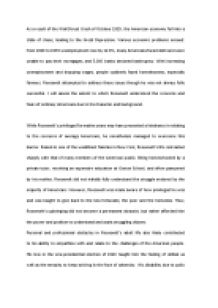 Did Roosevelts upbringing, background and character make it easy for him to understand the concerns and fears of ordinary Americans?

﻿As a result of the Wall Street Crash of October 1929, the American economy fell into a state of chaos, leading to the Great Depression. Various economic problems ensued: from 1929 to 1933 unemployment rose by 12.4%, many Americans faced debt and were unable to pay their mortgages, and 5,000 banks declared bankruptcy. With increasing unemployment and dropping wages, people suddenly faced homelessness, especially farmers. Roosevelt attempted to address these issues though he was not always fully successful. I will assess the extent to which Roosevelt understood the concerns and fears of ordinary Americans due to his character and background. While Roosevelt?s privileged formative years may have presented a hindrance in relating to the concerns of average Americans, he nonetheless managed to overcome this barrier. ...read more.

Personal and professional obstacles in Roosevelt?s adult life also likely contributed to his ability to empathize with and relate to the challenges of the American people. His loss in the vice-presidential election of 1920 taught him the feeling of defeat as well as the tenacity to keep striving in the face of adversity. His disability due to polio seemed to have changed his character as well. Before being infected, he ?was not particularly charming, rarely smiled and had an unfortunate habit of throwing his head up?. However, this was not what people saw of him when he became president. The American public viewed him as caring, understanding and, for some of them, ?The only president who ever cares for people like us?. ...read more.

Because of his charismatic and charming nature, people were not afraid to confront him with their problems or concerns. He was perceived as approachable, trust-worthy and helpful; he seemed to care about people as individuals, not just the country?s large-scale economic issues. His ambitious and dynamic persona also made him an inspiring figure. This is seen through the various rousing speeches he gave before and after he became president, in which he tried to raise the spirits of the American people, and did so successfully. In conclusion, I would say that Roosevelt had a considerable level of understanding regarding the concerns and fears of ordinary Americans. His privilege and education set him on his path of authority and leadership; however, his disability and professional obstacles taught him of adversity and allowed him to better relate to the American public. Faced with a crippling economy, the despairing public could look to him for sympathy, guidance and resolve. ...read more.