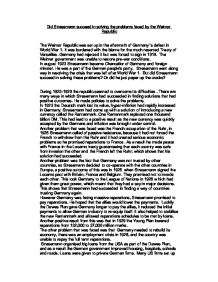 Did stresemann resolve the problems faced by the weimar republic?

Did Stresemann succeed in solving the problems faced by the Weimar Republic The Weimar Republic was set up in the aftermath of Germany's defeat in World War 1. It was burdened with the blame for the much resented Treaty of Versailles. Germany had rejected it but was forced to sign in 1919. The Weimar government was unable to restore pre-war conditions. In august 1923 Stresemann became Chancellor of Germany and foreign minster. He was a part of the German people's party. Stresemann went along way in resolving the crisis that was left after World War 1. But did Stresemann succeed in solving these problems? Or did he just paper up the cracks? During 1923-1929 the republic seemed to overcome its difficulties. There are many ways in which Stresemann had succeeded in finding solutions that had positive outcomes. He made policies to solve the problems. In 1923 the Deustch mark lost its value, hyper-inflation had rapidly increased in Germany. Stresemann had come up with a solution of introducing a new currency called the Rentenmark. ...read more.

The other problem that was faced was that Germany needed to rebuild its economy, there was an employment crisis in 1926, and the country was unable to repay the full term reparations. Stresemann organised big loans from the USA as part of the Dawes Plan, and as a result the German government improved housing, hospitals, schools and roads. Loans were given to private German firms. Many US firms set up factories in Germany, this allowed pensions and wages to rise. This support enabled not only the stability of Germany but enabled the high levels of payments that the Weimar government was making on benefits and health care. This shows that overall Germany had become more stable and Stresemann was able to solve the problems faced. However, Stresemann's polices were short -term solutions, they did not solve Germany's problems in long-term. He only papered up the cracks. All the problems that were faced had lead to negative results. The first negative result came from hyper inflation. Stresemann did solve hyper-inflation and the Germans accepted the new currency. ...read more.

Rich people then had to pay more taxes and they complained that the government was spending too much money on the poor and unemployed. This shows that Stresemann failed to solve the really important problems faced by the Weimar republic. In conclusion Stresemann did succeed in solving the problems faced by the Weimar republic. He rebuilt a strong Germany. He came up with clever solutions by the time he died in 1929. Germany had become one of the strongest economies in Europe; it was trusted and well respected Stresemann was also personally responsible for improved relations with USA and ensured the economic stability of the nation through the successful negotiation of the Dawes and Young plans. Also as Foreign Minister, Stresemann had numerous achievements. His first notable achievement was the Dawes Plan of 1924, which reduced Germany's overall reparations commitment and reorganized the Reichsbank. During the time of Stresemann, German culture evolved more, it boomed in the German film industry, productivity rose resulting in more jobs, Art and literature began to prosper. The years of 1923 - 1929 were known as 'The Golden Age' Stresemann's solutions had also pushed back the start of World War 2 and helped Germany to get back to pre- war conditions. ...read more.